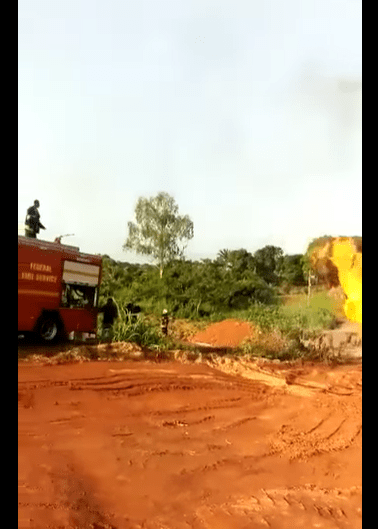 One of the drillers who allegedly caused the raging fire at Caritas University, Amorji-Nike, Enugu, has reportedly died, our source learnt on Tuesday.

The fire, which started on Tuesday, May 24, 2022, is suspected to be fuelled by methane gas

In a report gathered by SaharaReporters on Tuesday, the fire was still raging, meaning it has raged non-stop for 21 days despite efforts to put it out.

Sources also made it known that even though over 12 tanks of water with four drums of chemicals had been used, the fire continued to rage.

One of the sources said, “The unfortunate thing is that this fire has claimed one life now. I was here a few days ago when one of the drillers came and told me that the guy who ignited the fire, who was partially burnt, is died. It is so tragic.

“He blamed the whole situation on him (deceased) for not listening to advice. He said if he had listened when he was asked not to ignite the fire on the substance, probably we wouldn’t have got to where we are now.

One of the drillers who was reportedly burnt was taken to the National Orthopaedic Hospital (NOHE), Enugu for treatment.

Meanwhile, some experts from Port Harcourt, Rivers State were seen working at the site to possibly put out the fire.

A security guard at the site told our source’s correspondent that some experts came from Port Harcourt did everything possible on Monday to put out the fire but that their efforts were futile.

“Yesterday (Monday), they did everything to put out the fire yet it still rages on. We hope and pray that God will give them wisdom and knowledge to devise another means to solve this problem. Otherwise from the way I’m looking at it, it would require bringing foreign experts.

“The state and federal fire services have run out of ideas on how to extinguish the fire. They have used over 12 tanks of water and four drums of chemicals,” he said