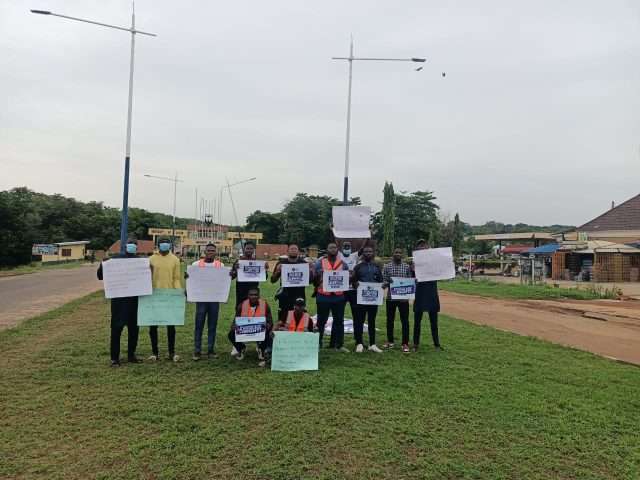 Students of the University of Ilorin have on Tuesday staged a peaceful protest to register their dissatisfaction over the unending industrial action embarked upon by the Academic Staff Union of Universities, ASUU, in Nigeria’s public universities.

Reacting to the 12 weeks extension of the strike action by ASUU, the students in large numbers vowed to carry their protest to the Government House, the state House of Assembly, roads linking the Ilorin International Airport, Federal Secretariat, Police Headquarters and the Department of State Services office among others if the meeting between the Federal Government and ASUU fails to resolve the crisis in the next few days.

They lamented their continued stay at home due to the lingering strike action and called on the government to listen to and meet ASUU’s demands to enable them to return to class and complete their academic programmes.

The students declared that they will have nothing to do with the 2023 general elections if the strike action was not called off.

To ensure a peaceful protest by the students and prevent it from being hijacked by hoodlums, DSS operatives, police personnel and Man ‘O’ War, manned strategic locations around the institution’s main campus to provide security.

President of the Students’ Union Government, Comrade Taofik Waliu, said the protest was staged to create awareness among stakeholders and public members over their sadness on the ASUU strike, adding “we are tired.”

“We want to graduate. The FGN should listen to ASUU’s demands. We don’t plan to move around town today. We hope that soon ASUU strike will be a thing of the past whereby hanging students can graduate and hanging 300 level students can move up and so on.

“However, if nothing fruitful comes out after the FG/ASUU meeting this week, we will move en mass continuously with other students of 10 educational institutions in the state to occupy and block the roads to various places in the state capital to register our displeasure over the lingering ASUU strike,” he warned.

In his own speech, the Chairman of the National Association of Nigeria Students, NANS, Comrade Salman Yusuf Yisa, appealed to state governors to intervene because the issue was beyond the Federal Government