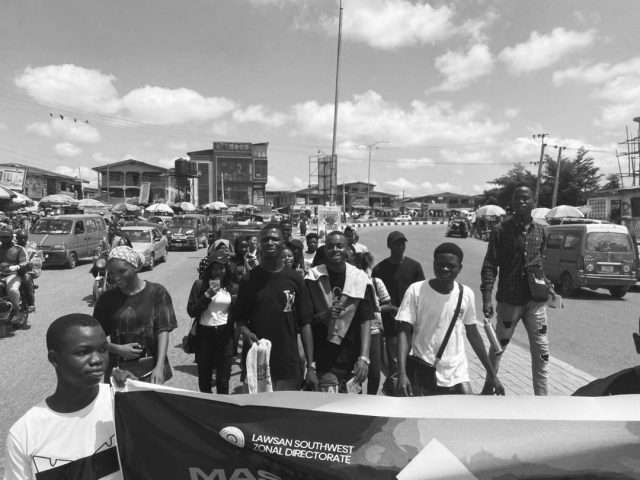 The Southwest Directorate of the Law Students’ Association of Nigeria (LAWSAN), Richard Solomon, has reset the grounding record by holding a multidimensional campaign in Nigeria under 24 hours against domestic violence.

In a statement made available to the publisher of this Online medium, the ‘Anti-Domestic Violence Campaign’ was the brainchild of a team of vibrant and conscious university undergraduates, across the Southwest zone; with the support of experienced personnel like lawyers and representatives from an institution created for the sole purpose of sensitizing the masses on the intricacies of domestic violence.

It was learnt of the primary objective of the program was achieved.

The demonstration which had enabled the participating students to identify that many individuals are misinformed and lack the necessary information about domestic violence in Nigeria. With cases of domestic aggression skyrocketing in recent times, it became necessary to propagate the concept properly and to show how toxic this societal anomaly really is. This spurred Law students across the Southwest zone into action, kindling their zeal to put an end to a social vice that has haunted the masses from time immemorial.

A subatomic examination of each state’s campaign strategies would show the degree of dedication the students put into the program.

Students of Oyo state held their rally at the Trans-Amusement Park, Ibadan. With a collaborative effort of the University’s Students’ Union; led by the President and Oyo State Director, they were able to reach out to hundreds of people(including market women).

Similarly, students from Osun state were able to sensitize all those in their domain. Led by the Southwest Zonal Director himself, Sen.Richard Solomon, they took to the streets of Osogbo, the State capital. The journey for change began at Freedom Park and was put to a halt at Osiumbare and Alekwodo. The purpose of the rally was achieved, and they were able to make an impact in the lives of those who witnessed their movement.

The Ondo team was not left out of this impressive performance. The movement was led by the State Directors, the Presidents of Achiever’s University and ELIZADE University, as well as stakeholders and other LAWSAN-ites gathered at Democracy Park. Their method of propagation was not restricted though, they were able to reach out to market women and the general public.

The Ekiti State campaign was also a success With the support and collaboration of FIDA, in attendance was the Deputy Zonal Director, Miss Lawsan, Chief Press Secretary, and the leadership of Lss Eksu. Ekiti team converged at Fajuyi Park and was also able to spread vital information revolving around the theme of the campaign. Other Universities like Bowen University, Harvarde University, Joseph Ayo Babalola University, Redeemer’s University and Crescent University joined the campaign in their respective faculties

Finally, the Lagos team took things up a notch by adopting a hybridized system for an overall dissemination of the theme of the campaign. They were able to sensitize people using the cyberspace to their advantage, dispersing graphic designs on different online platforms, in anticipation of the big event. The Lagos team collaborated with a vibrant and informative social media platform run by a team of cerebral university undergraduates, LASULIFE; using platforms like WhatsApp, Instagram and Twitter to inform people scattered across the state. Alongside the great people at LASULIFE is the Faculty of Law, Lagos State University’s Publicity team, headed by Omorinsola Lopez, Sen.Bamgbose Michael, and Boluwatife Kolawole, who made it a duty to inform the masses about the campaign. A Twitter Space meeting was held, in attendance were the likes of Richard Okoroafor Esq. ,Festus Ogun Esq. and an NGO designed to educate people about domestic violence in Nigeria.

Domestic violence is a menace that must be curbed in the society, as it is not only being experienced by the female folk alone but even the make gender. It includes physically abusive behaviors, assault of any kind; ranging from pinching, pushing, hitting or slapping, to choking, shooting, stabbing, and murder. Verbal, emotional, mental, or psychological violence is described as using words to criticize, demean, or otherwise decrease the confidence of the wife, husband, or other intimate partner victim; this aspect is also captured in the scope of acts of domestic violence.

The ripple effect of the series of demonstrations and campaigns spearheaded by students of the Southwest Zone was that.an enormous step was taken towards eradicating the societal menace that is domestic violence. Thousands of lives were touched by the passionate outreach and the campaign was a huge success. This was only achievable through teamwork and cooperation amongst the students across the zone.