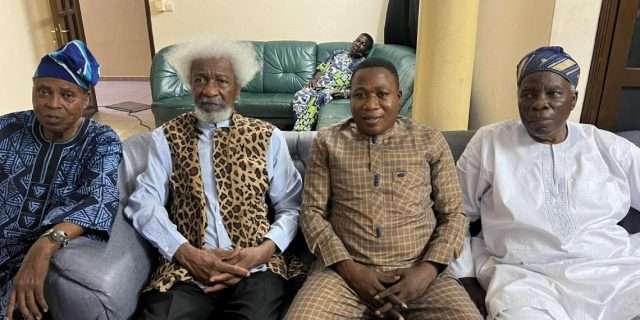 The Nobel Laureate, Professor Wole Soyinka, was reported on Sunday to have visited Sunday Adeyemo ‘Igboho’ in Cotonou, the Republic of Benin, to express solidarity with the Nigerian separatist leader and Professor Banji Akintoye, the chairman of the Nigerian Indigenous Nationalities Alliance for Self-Determination (NINAS), according to sources.

Our source gathered that according to some reports, the meeting, which was held behind curtains, was to “map out strategies on achieving an independent nation.”

We further learnt that the meeting “may not be unconnected with the bid for Igboho’s total freedom and return to Nigeria.”

Recall that this online news platform had reported that Igboho and his wife, Ropo, were arrested on July 19, 2021, by the International Criminal Police Organisation at the Cadjèhoun Airport in Cotonou, on their way to Germany.

Beninoise officials later released his wife but Igboho remained in detention until March this year, when they released him on the condition that he remain in the country “for the time being under full security,” according to his lawyer, Yomi Aliyu.

Last year, Soyinka joined other Nigerians in condemning the invasion of Igboho’s home in Ibadan, Oyo State, by operatives of the Department of State Services (DSS).