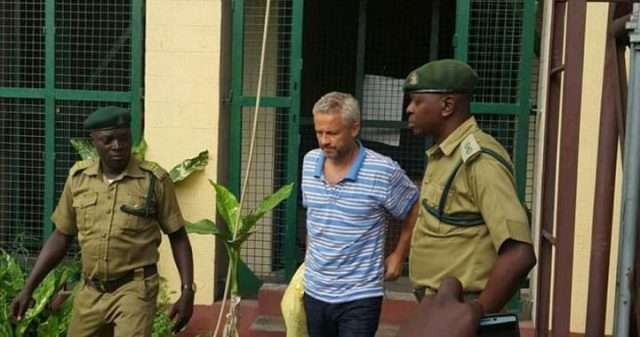 A Lagos High Court on Friday sentenced a Dane, Peter Nielsen, to death by hanging for killing his Nigerian wife and daughter.

Justice Bolanle Okikiolu-Ighile convicted Nielsen, 54, on two counts of murder brought against him by the Lagos State Government.

The judge sentenced Nielsen to death by hanging on both counts.

The Dane was charged with the death of his wife and singer, Zainab, and their three-year-old daughter, Petra.

The Lagos State Government accused him of smothering Zainab and Petra to death at 3.45am. at No. 4, Flat 17, Bella Vista Tower, Banana Island, Ikoyi, Lagos State.

He pleaded not guilty to the two-count charge of murder contrary to Section 223 of the Criminal Law of Lagos State, 2015.

He had earlier informed the Lagos high court sitting at Tafawa Balewa Square, TBS, that he and his wife had been intimate before the incident.

He revealed how she had watched a game of football with him.

“There was a football match that evening, my wife knew it was a very important match to me, to my surprise she watched it with me.

“Around 9:45pm, the children went to their room, my wife and I continued watching highlights from the game. It was a very joyful moment.

“Around 11pm, we took our bath together, went to our bedroom and we were intimate.

“Around 2:30am, we were woken by our daughter, Petra, who entered our room and said she wanted to watch cartoon on the iPad,”

He said his wife took his daughter to the sitting room for the cartoons she wanted to watch and she told him that she would warm some food for their daughter.

“I kissed my wife and daughter and went back to sleep, about 2:35am.

“I woke up around 7:30am and noticed that my wife was not in the bedroom so I went to look for her