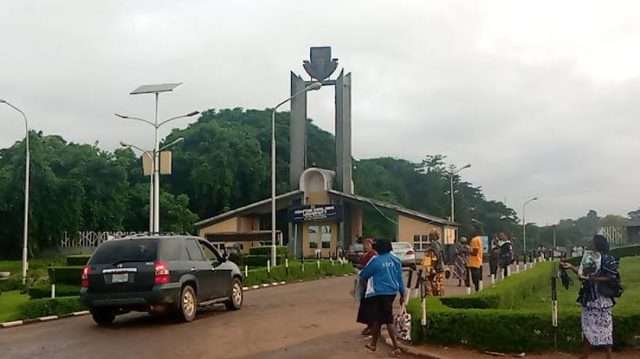 The Department of Physical and Health Education at Obafemi Awolowo University, Ile-Ife, Osun State has been at the mercy of rainfall, with floods ravaging the floors of the classes whenever it rains.

Pictures obtained by our correspondent, on Tuesday, show that the rain which fell on Monday evening left the classes in the department flooded.

It was gathered that students usually had to either miss their classes or endure dipping legs in the water to perform at the department.

In a reaction from reports which indicates the flood as a chill pill from ASUU to the students who would have been worried about missing class.

Also, Some of the students, who spoke to our correspondent under the condition of anonymity, for fear of victimisation, said that they had endured the horrible situation for a long and no one was doing something about it.

Meanwhile, the PUNCH also confirmed that some of the facilities at the department had their roofs already blown away, with some dilapidating structures, amongst others.

Sources also said that some of the lectures’ offices were not left out in the situation.

“Whenever it rains, the place is a pool.

“Very soon, we, the PHE Students will be having our class under the tree. Maybe by then, the school management will be happy,” a student in the department, identified simply as Folawe, said.

“This Department needs total renovation. The gym especially is always full of water whenever it rains. And that has been since 2016 that I was doing my B.Ed.

“Visiting the school after these years later, I realise it has worsened. I think OAU should start taking good care of a unit that made it great.

“A place like Mainbowl and PHE is not supposed to be in this bad condition.

“The swimming pool pavilion is nothing to write home about, and the indoor gym is like a small pool.
Has it gotten to that stage for OAU?

“I regret coming back to see this.

“This gymnasium was one of the best in Africa during my undergraduate days, how on earth did OAU Sports Complex and PHE get to this level?

“Is the School management aware of this?” an alumnus, Tunji James, who visited the school recently, said.

OAU, among other federal universities in Nigeria, had since battled infrastructural decay, with students and lecturers often protesting the worse living and learning conditions over the years.

It would be noted that the Academic Staff Union of Universities has been on strike action since February 2022, following their demand for the revitalisation of the tertiary education system.

Meanwhile, the non-accountability of funds for the revitalisation of university system trailed some universities.

A 2018 investigative report by THENEWSDIGEST revealed some intricacies trailing accountability of a 2013 Needs Assessment funds granted to universities, with a look at the accommodation crisis that rocked OAU and the funds meant for constructing hostels and upgrading facilities.

According to the report, in 2013, a letter was addressed to the then Vice Chancellor, Professor Bamitale Omole, stating that an amount totaling N3.05 billion was approved by the Federal Government for allocation to the university as the first tranche of the Needs Assessment program.

Meanwhile, in 2018, the management of OAU led by the Vice Chancellor, Professor Eyitope Ogunbodede, had sent the majority of the students out of the campus hostels to seek accommodation outside the campus. A move that was protested by the students who called for the construction of new hostels on the campus.