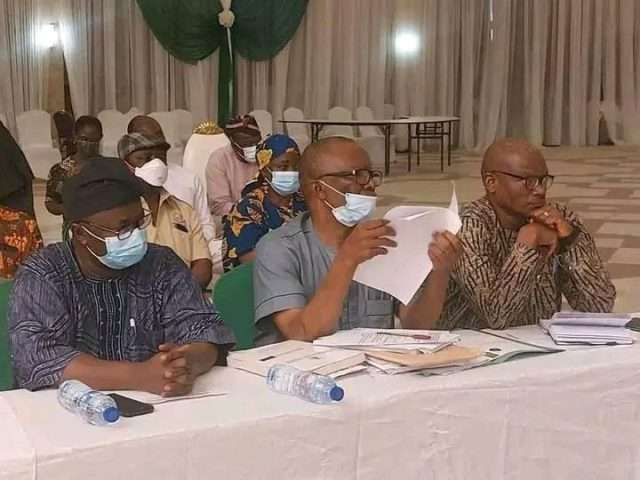 The Unions of the striking lecturers have expressed their intent to consider the federal government’s appeal to call of the ongoing industrial action. Stressing the intervention of the Nigeria Inter Religion Councils (NIREC) in ensuring end of the academic strike.

In a statement by the Labour ministry, Mr Abubakar called for a compromise between the parties.

“I don’t think it will be so beneficial to us while our children are at home and threatening violence across the country, blocking roads and airports and we as elders sit down watching,” he said.

“The best thing is to go back to the classroom and continue negotiation. We will continue sitting together until the final solution is attained. It is not impossible.”

He added that it would portend danger to allow young people to “sit idly” at home.

“That is why we plead with the unions to see the need to call off the strike while we keep negotiating.”

The statement also quoted the co-chairman of NIREC and president of the Christian Association of Nigeria (CAN), Supo Ayokunle, as noting that the poor funding of the universities did not just start, “but borne out of long periods of neglect by previous governments, which snowballed to our present situation.”

In a response by the President of ASUU, Emmanuel Osodeke, a professor informed our source on Saturday that the union would consider the appeal and make its decision public as soon as possible.

He confirmed that NIREC appealed to the striking unions on Thursday. However said such appeals are not new to ASUU.

“It is an appeal and our members would consider it. It is not a request but an appeal and appeals are usually for consideration.”

Mr Osodeke, however, did not say when the union would decide.

“When the decision is taken, everyone would know,” he said.

Reacting on behalf of JAC of SSANU and NASU on Saturday, the national vice-president of SSANU for the Western zone, Abdussobur Salaam, said the unions have referred the appeal to various organs of the unions for consideration.

According to Mr Salaam, members of NIREC are respected religious elders and role models in society. He appreciated them for their intervention.

He, however, urged the members to also appeal to the government to always live up to their promises and imbibe a culture of trustworthiness.

“We are not strange to appeals as parents fora, students’ bodies have also reached out at one time or the other.

“Everyone is respected, and especially the NIREC leadership. But we have found ourselves at this level because of the insincerity of the government. So it is also important for the government to be appealed to for a change of character.

“We have referred the appeal to the relevant organs of our unions and I can assure you that in the coming days, our decision will be made public.”

Recall that this medium had earlier published the optimism expressed by the Labour Minister in seeking end to the persisting strike.