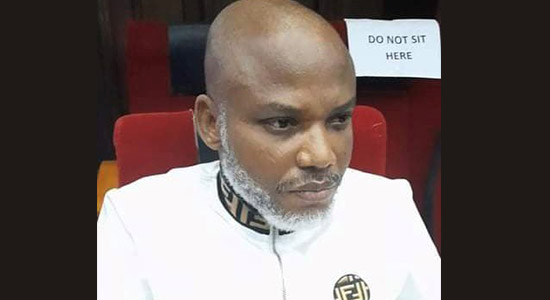 Kanu, in the suit marked FHC/ABJ/CS/1585/21, filed by a member of his legal team, Barrister Maxwell Opara, wants an order of court directing the respondents to immediately allow him to appoint an independent medical practitioner of his choice from a certified government hospital to review his medical files.

The detained leader of the proscribed Indigenous People of Biafra (IPOB), Mazi Nnamdi Kanu, has dragged the Directorate of State Services (DSS), its director-general, and the Attorney General of the Federation and Minister of Justice before a Federal High Court Abuja, over alleged poor medical attention for him in detention.

Kanu is also is seeking an order to allow him access to facility and material for the practice of his religion. The applicant is also praying the court to direct the respondents to immediately remove him from solitary confinement.

Furthermore, Kanu is seeking a perpetual injunction restraining the Respondents, their authorised agents by whatever name so-called, from further disturbing or interfering with his rights to dignity of human person and freedom of thought, conscience and religion or in any way infringing on his constitutional rights as guaranteed by law or from making any attempt capable of violating his rights as guaranteed under the Constitution.Among other reliefs, the applicant wants a declaration

“That notwithstanding that the Applicant is in the Respondents’ detention facility, the actions of the Respondents in keeping the Applicant in solitary confinement, providing him with quack and incompetent medical services and depriving him his right to have access to his medical reports amounts to mental torture and concomitantly subjects the Applicant to inhuman and degrading treatment, thus a gross violation of the Applicant’s right to dignity of human person as guaranteed under Sections 34(1)(a) of the Constitution of the Federal Republic of Nigeria 1999 (as amended) and Articles 5 African Charter on Human and Peoples rights (Ratification and Enforcement) Act CAP A9 Vol. 1 LFN 2004.”

In an affidavit deposed to by Emmanuel Kanu, it was averred

“That despite the fact that there is a subsisting order of court that he should have unrestricted access to the medical practitioner of his choice, that the Respondents are still preventing him from enjoyment quality medical care.”

Emmanuel said he paid a routine visit to the Applicant at the Respondents’ detention facility on 9th day of December, 2021 at about 3pm in presence of Habila G.Turshak Esq and he told him that the Medical Practitioner that has so far attended to him is the one he suspected to be an incompetent one and the Respondents have denied him access to his medical reports and records.

No date has been fixed for the suit