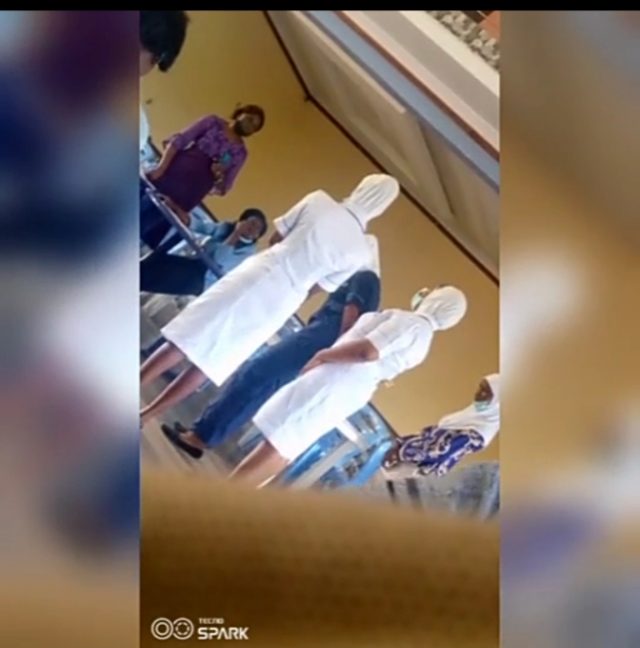 It has been reported that uneasy calm has again enveloped the School of Nursing and Midwifery of the Obafemi Awolowo University Teaching Hospital Complex (OAUTHC) over another use of hijab from the management against the Muslim nursing students.

And unless urgent steps are taken, a major religious crisis may be brewing at the Complex as the Principal of the School of Nursing and Midwifery OAUTHC, Dr (Mrs.) A. B. Awoseemo, reportedly harassed and humiliated Nursing Muslim students over the use of hijab, warning them to either remove it or get rusticated. In a viral video that bears semblance with the hijab imbroglio which recently engulfed the School of Nursing of Ladoke Akintola University of Technology, Ogbomoso, the principal on Monday called out four nursing students who were all adorned in the cape or shouder-length hijab in the midst of their classmates and allegedly made them sign an undertaking that: they will be expelled if they use their Hijab to school forthwith.

The incident happened on Monday, November 29, at the Tutor/Students’ Congress held at the Nurses’ house OAUTHC, Ile-Ife.

Findings revealed that a similar case of molestation was also recorded at another congress held at the Wesley Guild Hospital, Ilesha branch, where female Muslim students they were also ordered to stop using the Hijab or be expelled from the school.

In the 2 minutes, 50 seconds video, Dr. Awoseemo was heard telling female Muslim students in the simple Hijab that their dressing isn’t appropriate for nursing profession, thereby mandating them to write an undertaken right before the entire students who graced the Congress.

The content of the undertaking, a copy of which was received by our correspondent, instructed that all students regardless of their religion, Muslims or Christians (Deeper Life), among others should dress in the proper school uniform. Clothing such as white dress, cap, non-knocking shoes, turban, veils, hijab, etc. will not be accepted and if students are found guilty, they would be withdrawn from the school.

In conclusion, we abide by the rules and regulations of the management and according to nursing and midwifery circular on nursing students dressing until we get a further directive from the management,” the undertaking read, in part, and was signed by the three affected students and 100 level student, Ogunnaine Grace, a Christian, as a witness.

Efforts to reach the affected nursing students to know how they feel about the latest development proved abortive as they have subsequently declined to respond to calls and messages.

However, a reliable source in the Complex indicates that the sudden ‘gang-up’ against the use of hijab was orchestrated and premediated by major stakeholders in the OAUTHC.

It will be recalled that similar incident occurred in the school last year whereby the hijab wearing nursing students were successfully made to abandon the use hijab to avoid rustication. The Muslim community tried unsuccessfully to convince the authorities to respect the official dress code approved by the Nursing and Midwifery Council.

It appears therefore that the ‘feat’ achieved by the authorities has further emboldened them to continue to brazenly violate the Fundamental Human Rights of the Muslim students regarding hijab.

Reacting to the incident, the Muslim Students Society of Nigeria (MSSN) warned the authorities of the OAUTHC Ile-Ife to desist from any act that may ignite the flame of religious conflagration in the Institution.The society particularly warned the Principal of the School of Nursing and Midwifery OAUTHC, to desist from harassing female Muslim students over the use of hijab.

A statement jointly signed by the Amir, Abdul Jeleel A. Arikewuyo, the Secretary, Abdul Wakeel O. Akanni and the PRO, Saheed A. Raji said the threat and subsequent labelling of the hijab wearing Nursing students as ‘extremists’ because they choose to cover their heads like the Holy Mary, the mother of Jesus remains unconstitutional.

“For the avoidance of doubt, it is instructive to emphasize that Mrs Awoseemo not only labelled the faithful Sisters as extremists for covering up their heads as required of them by their religion, an act which found its acceptance in the Nursing and Midwifery Council guidelines, as well as the Constitution.“

The overzealous Nursing Tutor went a step further to force the female Muslim students to unlawfully sign an undertaking to remove their Hijabs or get rusticated, an order she claimed emanated from the hospital authority authority at Ile Ife.

The statement reminded Dr Awoseemo that the school, being funded by taxpayers money remains a property of the Federal Government, stressing that she’s only a Principal appointed by the government with her salary being paid by the same government and not of the church.

The statement used the medium to call the attention of Awoseemo’s employer and the general public to frequent but radical attempt to evangelise the students under her care, “by all means, forms, and ways”.

“May we state that Mrs Awoseemo’s dangerous flight, stealth crusade and crude evangelisation techniques from all intent and purposes, are an attempt to undermine the Fundamental Human Rights to Freedom of Religion and Expression of the Muslim Students of the institution, a clear dissonance and fragrant disobedience to the Nursing and Midwifery Council’s guidelines; and above all, to the Constitution of the Federal Republic of Nigeria.“

Like Mrs Awoseemo, we have also been briefed of how members of staff of Christian faith have subjected our members at Ilesa campus (Wesley Guild Hospital Unit) of the institution to ridicule, coercion, undeserved punishments and expulsion threats for insisting on the use of Hijab.

These acts from our tormentors who are fast to tag and label us fanatics have made us believe they may truly be enjoying the backing of the quoted authority to undermine the rights of our members, despite the glaring instances of acceptance of its usage by the Nursing and Midwifery Council as well as the Constitution of the Federal Republic of Nigeria”.

MSSN noted that a school of coordinate jurisdiction, the School of Nursing Osogbo has since conformed with the Nursing Council guidelines on the use of Hijab and urged both Mrs Awoseemo and her counterpart at the School of Nursing, Wesley Guild Hospital, Ilesa, Mrs. Grace Kikelomo Fatoye to borrow a leaf from their colleagues Osogbo campus.

“While we remain peace-loving, an adherent of the gospel of truth and peace, we will strongly resist any attempt to trample upon our members’ rights as bonafide citizens of this country from any quarters”, the statement said.

The Muslim students told Dr Awoseemo, Mrs Fatoye, the Principal, School of Nursing, Wesley Guild Hospital, Ilesa, their deputies and other colluding members of staff to be aware that MSSN shall explore all lawful and legal means to resist any attempt by anyone, group and or groups who may be infringing on the rights of their members to enjoy their inalienable rights.

When contacted, the Principal, Dr Awoseemo confirmed the incident but refused to comment on the alleged threat and humiliation of Muslim Sisters, saying, I am not in the best position to speak on the uniform issue.

She said: “I am not the proprietor of the institution. The clarification should be through the CMD and Management of School of Nursing. I cannot prescribe uniform. The school belongs to OAUTHC. The Management can answer that”, she said.

Meanwhile, speaking with our correspondent, the Imam of OUTHC, Dr Ibrahim Bello who spoke on behalf of the Muslim Community confirmed the incident but said efforts were ongoing to resolve the incident amicably.

According to him, the Muslim community is not folding it’s hands. “We will ensure all issues are resolved amicably,” he said