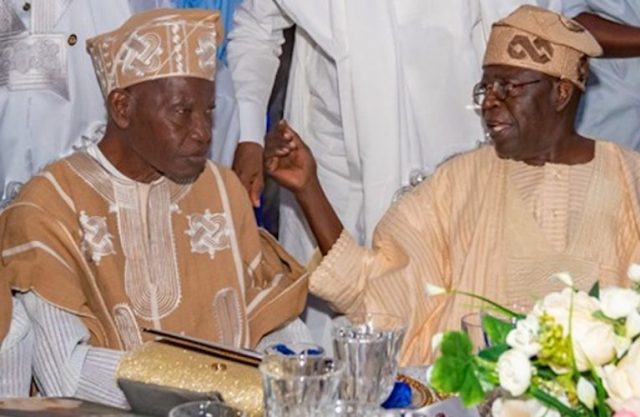 The former Interim National Chairman of the All Progressives Congress (APC), Chief Bisi Akande, has said that President Muhammadu Buhari’s decision not to accept the National Leader of the APC, Senator Bola Tinubu, as his running mate in 2015 was not the first time Tinubu would confront serious opposition to his vice-presidential ambition.

Akande revealed this in his recently released autobiography, titled: ‘My Participations,’ published by Gaskia Media Limited. This is coming as Atiku at the weekend faulted Buhari’s development policies.

Akande narrated how Atiku, who was the presidential candidate of the defunct Action Congress (AC) in 2007, was non-committal to the party elders’ decision despite all the pressure from the then Alliance for Democracy (AD) to make Tinubu his running mate.

In 2007, AC fielded the then Vice President Atiku, who defected from the Peoples Democratic Party (PDP) as its presidential candidate after his fallout with his boss at the time, President Olusegun Obasanjo, who did not want Atiku to succeed him.

According to Akande, despite the pressure mounted by the leaders of the party, including former Ogun State Governor, Mr. Segun Osoba; ex-Ekiti Governor, Mr. Niyi Adebayo and a one-time governor of Oyo State, the late Lam Adesina, Atiku never gave them his word on the matter until he picked Senator Ben Obi.

“It was the second time Tinubu was tantalisingly close to the VP slot. In 2007, we formed a party, the AC, with Abubakar Atiku. We agreed that Atiku should be our presidential candidate and we had the understanding that he would run with Bola Tinubu. “

I was the chairman of the AC. One day, after we had nominated Atiku as our presidential candidate, one young man came and gave me a form from the Independent National Electoral Commission (INEC).

“I told him I could not sign a blank form and that I, as the chairman, must know the name that would be filled in it. “

The young man, Bashir Yusuf Ibrahim, must have been the organising right-hand man of Atiku. He was an active person from Kano.

The following morning, he came again with Lawan Kaita. “Kaita begged me and said it was Ben Obi whom Atiku had chosen as his running mate behind our back. So, I signed the form because I believed as the candidate, Atiku had the right to choose his running mate. If I refused to sign, that would create a crisis.”

However, Akande expressed the belief that Atiku should have chosen his running mate from the AD even if he was no longer favourably disposed to Tinubu at the time. He stressed that with Atiku, the belief was that the party would be strong in the north, but because of the preponderance of PDP in the South-east and the South-south, it would face more resistance in that area.

He added: “Obasanjo was stepping down from the presidency. Therefore, the Yoruba, even the few that benefitted from his arrogant rule, would no longer be obliged to vote for the PDP. “

Segun Osoba, Niyi Adebayo, and Lam Adesina had earlier met Atiku and we proposed to him our choice of Tinubu, and he promised to come back to us. He gave us a date. On that date, we all assembled. Atiku came with Audu Ogbe, Tom Ikimi and Usman Bugaje.

“We proposed that Tinubu should be the running mate, though Tinubu was not at the meeting. Atiku would not give us an immediate answer. He said he wanted to have more consultations.”

According to Akande, Ikimi, Ogbe, and quite some others were all very strong against Tinubu, because they said it would mean a Muslim-Muslim ticket which eventually ended the discussion in a deadlock.

“Atiku never said anything. We left the meeting,” he pointed out.

The former Osun State governor stated that what prompted the pressure to field Tinubu was that anytime there was the need for money,” Atiku would say ‘Bola please help us”.

Furthermore, he wrote: “Bola was the only one spending the money among us. The rest of us were poor. Tinubu also put all his energy and resources into the formation of the AC and we felt he deserved a spot on the ticket.”

He noted that when the matter was discussed with Tinubu, he said they should further discuss the matter with Atiku.

“It was after we were deadlocked that they brought me the blank form. So, Atiku ran with Obi and failed. Only Lagos state from South-west voted for Atiku,” Akande added.

Akande stated that the leaders of the succeeding party tried not to take a similar route with the APC so that the result would be different because the party was facing an opponent that had “become set in its ways and was riding roughshod over everybody.”

According to him, because Nigerians had high expectations of the APC, the party had a sacred duty not to disappoint them. On how Buhari and Tinubu became close, he said aside from Buhari’s admiration for Tinubu’s business and political acumen, he had some level of trust that the former Lagos State governor will not “poison” him.

“By the time we completed the merger talks, Tinubu and Buhari had become very close. Buhari always stayed at the Eko Hotel anytime he was in Lagos but would prefer to come to Tinubu’s place for dinner or lunch even sometimes for breakfast. “

Tinubu‘s house at Bourdillon Street, Ikoyi, became Buhari’s second home and he felt completely at home there whether Bola was home or not. This became more so after he escaped an assassination attempt in Kaduna. ‘’I prefer to eat where I know I will not be poisoned,’’

Akande quotes Buhari as saying,” stressing that “it appeared they trusted each other”.

Akande further argued that was it not for Tinubu, it would have been almost impossible for Buhari to win the 2015 election.

Tinubu was a former senator who had also served as the governor of Lagos State for eight years. He was one of the leaders of the opposition NADECO during the military era. “Without him, the APC miracle would have been more difficult if not impossible. All these made Buhari admire and respect him,” Akande said.

The former vice president spoke on ‘Diversity, Education and Autonomy’ while delivering the convocation lecture of the Achievers’ University, Owo in Ondo State.

Atiku, who reiterated his call for the autonomy of the constituent parts, said the country needs to tailor its development policies and practices to its diversity.

According to him, the excessive centralisation of power and concentration of resources in the federal government has not served Nigerians well. Rather, he said they have encouraged a domineering all-knowing centre that stretches itself into every aspect of life with little positive results.

He said if education is made more accessible to young people in Nigeria, the country will progress, adding that it would also solve some of the challenges facing the country. “Greater autonomy for states will allow ideas to germinate from anywhere and blossom. “

Reduction of federal powers and responsibilities and greater autonomy for states would, for instance, allow a state with very low demand for university spots to decide whether its priority is another federal university or investments in primary, secondary teacher education to ensure that its young population has basic education, preparatory for possible university or vocational education in the future.

” The former vice president argued that education should be made compulsory in the country. “

” He said if there are severe consequences for parents who refuse to send their children to school, the number of out-of-school children will reduce and that the country’s per capita income “

would not have stagnated for 40 years.