Home Breaking We Can Cripple Nigeria If FG Thinks It Can Use Justice Nyako...
Facebook
Twitter
WhatsApp
Telegram 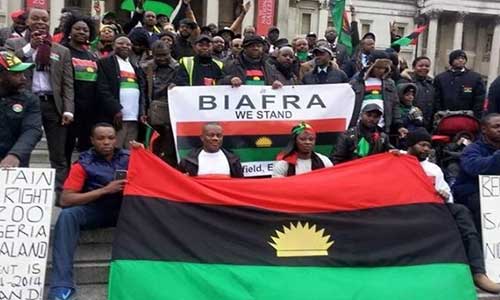 The pro-Biafra secessionist group, the Indigenous People of Biafra (IPOB) has described the adjournment of its leader, Nnamdi Kanu’s case to January next year by Justice Binta Nyako as “bias and whimsical.”

According to the group, the judge is mischievous and cannot be trusted with justice for having court proceedings without the presence of Kanu’s counsel in the courtroom on Wednesday.

IPOB also stated that it was obvious that Nyako was dancing to the tune of the Nigerian government and the nation’s secret police, the Department of State Services (DSS), which wanted a secret trial for the separatist agitator.

The group revealed this in a statement by its media and publicity secretary, Emma Powerful, which was obtained by SaharaReporters on Friday.

Kanu’s trial before the Federal High Court was adjourned to 19th January, 2022, after his legal representatives were locked out of the courtroom, an action that has been met with wide condemnations.

Reacting in a statement titled, ‘We Will Cripple Nigeria If The Federal Government Thinks It Can Use Justice Binta Nyako To Keep Our Leader In Perpetual Detention Without Trial – IPOB,’ the group reiterated that no degree of intimidation can dampen the morale of its members for seeking a sovereign Biafra nation.

The statement read, “We the global movement and family of the Indigenous People of Biafra (IPOB) unequivocally condemn the attitude of Justice Binta Nyako over the way she is handling the case of our Leader, Mazi Nnamdi Kanu before her court. We are most shocked at her obvious prejudice and bias during the last court proceedings which resulted in her whimsical adjournment of the case to January 19th and 20th, 2022.“

Justice Binta Nyako is engaging in judicial rascality and impunity at the behest of the federal government of Nigeria aimed at keeping our Leader in perpetual detention without trial. This rascality only portrays that Binta Nyako is simply playing the script handed over to her by the Fulani caliphate of which she belongs to.

“We wish to express our displeasure with Justice Binta Nyako’s handling of this case. How can a judge put a defendant on trial without legal representation? Justice Binta Nyako has always wanted to conduct a secret trial of this high profile case which concerns the personal liberty and human rights of the accused.“

Her constant long adjournments, her open bias and willingness to do the bidding of the DSS has seriously eroded the confidence of the accused on the neutrality of the Judge in handling this case. Justice Binta Nyako has given us sufficient reason and ground to doubt her ability to give justice and fair hearing to our Leader considering her antecedents and the manner and way the judge has been going about this case.

“Locking out the legal Representatives including one of our Leader’s counsel from the US, Bruce Fein from the courtroom has only exposed Justice Binta Nyako’s bias and prejudiced disposition to this case before her.“

We are aware that Justice Nyako is working with DSS to humiliate our leader Mazi Nnamdi KANU but the world should hold her accountable for her actions.

“But one thing the judge must understand is that we are determined in our irrevocable resolve to restore Biafra. No amount of intimidation, persecution or prejudice by the oppressors or their agents can derail our match to freedom and the ultimate restoration of the Sovereign State of Biafra.“

“It is impossible for the Fulani to dictate to IPOB and the present generation of Biafrans.”

“They may have done so to our fathers and elders but cannot dictate to the present generation of Biafrans.”

Our elders, traditional rulers, religious leaders and political elite who are begging IPOB to soft-pedal must take serious note of the travesty and shenanigans playing out in Justice Binta Nyako’s Courtroom. Our patience is not infinitely elastic