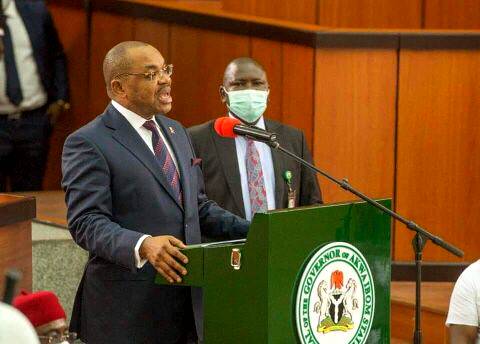 The Governor who stated this on Thursday while delivering a lecture at the Arewa Media Interactive and Development Forum held at Arewa House Kaduna said, the country must rise to this reality and fortify those foundations with the bricks of faith, patriotism and love as Nigeria needs new foundations to confront the challenges of today since Nigerians are inherently united.

According to Governor Emmanuel, “for decades, the drumbeats of our Nation have filled and seared the ears about the fragility of our unity and the elasticity of the tolerance of our diversity. Some have prophesied the imminent demise of our Nation, so many scenarios depicting the coming Armageddon have been pushed, prognosticated and predicted. But in all of these, our Nation still remains intact. Though the contours of our unity may not be straight, though the lines of development may be zigzag, the tone and tenor of our discourse discordant and divergent, but the soul, the spirit and the identity of our Nation remain sacrosanct. And on this, all Nigerians of goodwill have come to a solid agreement”.

He noted with admiration that Nigeria is a nation that is diverse, and beautiful as a coat of many colours as what tends to divide us should bring us together.

Hear him, “Is it tribe, is it language, or is it food, or is it dance or is it religion? Take, for instance, the consumption of kola nuts. Few know that it is grown in the Southwest, used for prayers in the East, and consumed for recreation in the North. It comes to life among the Yoruba, gives life in Igboland and is lively in the jaws of the Hausa man. In the same way, a lot of our onions come from the far North; it enriches Ofe Nsalla in the East, Ewedu in the Southwest and Afang soup in my house in Uyo”.

Continuing, he said, “We quarrel over religion yet when a big business deal is hatched, no one asks why Ahmed praises Allah and Adewale shouts Hallelujah. Both of them are smiling at the same bank.

It was the same country that built a marvel of a pyramid from groundnut in Kano. Experts came from Malaysia to learn about palm produce in the South-South and South-East regions, respectively.

And cocoa underwrote the prosperity of the Western Region. Oil was in the backdrop then. It is same Nigeria, the same tribes, the same faiths, the same language, the same historical backgrounds, the same geography. So if I may ask, what changed?”

He noted that Nigerians were glad when the late Maitama Sule orated on the floor of the United Nations and rejoiced when Wole Soyinka won the Nobel Prize for Literature, advocating for more unity despite our diversity.

“In the rougher days of Boko Haram, the militants burned Churches and Mosques, and they slaughtered Muslims and Christians. Who were the soldiers fighting to save the whole of the country? We did not say it is a Northern fight, so no Southern soldier should go there. It was not a Fulani soldier or an Ibibio infantryman.

It was the Nigerian soldier. When bullets are fired it does not bear a message on what tribesman it should fall. It hits a human, a Nigerian whatever the name of his God or the tribe or language he confesses”, he declared.

In his words, “We have had it in the past. We can have it again. I am sure that a good number of those listening to me now must have heard of Umaru Altine, a Fulani man from Sokoto, who was popularly elected as the first Mayor of Enugu in 1952 and he stayed in office till 1958.

The Western Region House of Assembly also had an Igbo man, Emmanuel Ebubedike, from Ozobulu in present-day Anambra State, as the Representative of Ajeromi/Ifelodun/ Badagry Constituency. We can point to several other examples”.

He regretted that efforts of some founding fathers at laying a solid foundation for national unity and cohesion have been destroyed as what we see nowadays is a country where ethnic champions drive the narrative, and the cacophony of discordant voices makes it difficult for us to hear ourselves. “This has been given expression in the numerous calls for restructuring, resource control and even an outright division of the country along ethnic and tribal lines”, he stated.

Governor Emmanuel explained that several reasons have been adduced for this state of affairs as many individuals and groups have taken umbrage at the over-centralization of power at the centre, perceived marginalization of some parts of the country as these are sore points that give a fillip to the agitations for balance and equity in the country, warning that we cannot afford to run a country where some parts of our country feel marginalised or left out of the scheme of things as this is a potent threat to the unity of the country. “We must ensure that there is equity and justice and that no part of the country is made to feel less of itself as this will definitely not augur well for our union” , he admonished.

He blames most part of the nation’s current problems on the elite, stating that the Nigerian elite stokes the hate between one part and another. “ And we are seeing them in the debate over VAT, restructuring, zoning, herdsmen and these are not too difficult issues to resolve. VAT calls for fairness between us. To restructure is for all to feel like the brother’s keeper. It ensures we all eat from the same pot and no one goes home hungry or deprived. Zoning means abiding by a formula that works for all ”, he x-rayed.

He noted that it only takes the people to sit at a table and cross-fertilize ideas, with patriotic give-and takes. “There will be no zero-sum game. The part will become the sum and the sum will be like the part. The equation will be complete. As former British Prime Minister Winston Churchill once said,? It is better to jaw than to war-war. But if one set must take everything, we will always remember our languages, our tribes, the aroma of our mother’s soup. Hate then replaces love, and handshakes will move beyond elbows”, he stressed.

According to Governor Emmanuel, as a way forward, Nigerians must sit down and talk to themselves, rather than talk at themselves.

“ We must listen to understand, rather than listen to respond. We must build bridges of unity rather than walls of division. We must realise that every part of our country is an equal stakeholder in the Nigerian project and work actively to harness the best of our diversity for the good of our country.

There must be a level playing field and equal opportunities for all Nigerians, irrespective of where they come from or what language they speak. ”

“Development plans and projects of the government must also be spread evenly across the country so that a sense of fairness and justice will permeate the land. We must take deliberate steps to integrate ourselves and unify the country. One quick step we can take in this direction is a little tweaking of the format of the National Youth Service Corps. This was one of the instruments designed to unify our nation but which hasn’t quite achieved this purpose. I suggest that we make it mandatory for States to retain a certain percentage of youth corpers in their public service every year. This way, we would create employment and state civil services would be more multi-ethnic as unity is a creative process”, he advocated.

He advised that the situation where any part of the country is denied commensurate benefits from resources harnessed from that part will only further alienate the people there and weaken our bond as a country, noting that the leaders must work to restore hope and confidence by actively ensuring that there is a sense of belonging and inclusion imbued in our citizens.

“Far too many of our compatriots identify more with their tribe and ethnic group than with our nation. We don?t need more Ibibios, or Fulanis, or Igbos, or Yorubas, or Ijaws, or Hausas. What we need is more Nigerians!”, he admonished.