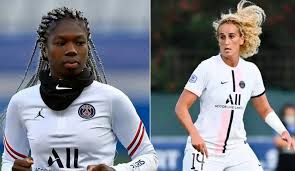 Aminata Diallo, far left, and Kheira Hamraoui during a match in September.

Aminata Diallo on Friday denied any involvement in a street attack on her teammate Kheira Hamraoui, in her first public statement about an incident that has shaken the Qatar-owned club.

Diallo was driving fellow midfielder Hamraoui home on Thursday evening last week near Paris after dinner when her car was stopped by two masked men.

They dragged Hamraoui out and beat her with a metal bar on her legs, meaning she was unable to play this week in PSG’s Champions League clash with Real Madrid. Diallo was detained by police at her home on Wednesday and held for nearly 35 hours before being released without charge, with investigators looking into whether on-field rivalry might explain the violence.

Diallo “hopes that judicial authorities conclude their investigation quickly and is sure that this will end up showing her complete and total innocence,” a statement issued by her lawyer said on Friday.

The statement denounced a “totally artificial suggestion of a rivalry between her and Mme Kheira Hamraoui that would explain why she would target her teammate. This theory does not reflect at all the reality of their relationship.”

French media reported that Hamraoui had raised the alarm about Diallo when she filed a police complaint about the attack, highlighting the unusual route taken by her teammate and the slow speed of their vehicle when the attackers sprang out.

A man already in jail over a separate assault case in the southeastern city of Lyon — a friend of Diallo’s — was also arrested as part of the investigation before he too was released without charge on Thursday evening.

Diallo criticised the “media speculation which has already condemned her, without justification, and she will not hesitate to launch legal action if necessary against any defamation.”

“Other far more serious theories are now being explored by investigators that do not involve my client,” the statement from lawyer Mourad Battikh said.

Her detention overnight at a police station in Versailles outside Paris was also unnecessary “given that she could have made a statement without being subjected to constraint,” he said.

– ‘Friends’ –Given the manner of the attack on Hamraoui and the arrest of Diallo, commentators had recalled a notorious assault on American ice skater Nancy Kerrigan in the run-up to the 1994 Lillehammer Winter Olympics.

Her rival Tonya Harding was banned for life after her ex-husband and bodyguard hired a hitman to club Kerrigan in the leg.

Diallo, 26, and Hamraoui, 31, were described by club sources as friends who even holidayed together, despite their competition for the central midfield berth in the PSG team.

Hamraoui, a capped French international like Diallo, returned to the French club in the summer from Barcelona where she won the Champions League last year.

Unable to play in Tuesday night’s clash with Real Madrid after her assault, she was replaced in the team by Diallo who played most of the match before being substituted in the 89th minute.

Neither woman attended the team’s training session on Friday, the club said.

PSG, which has invested heavily in its women’s team, has asked for the table-topping clash with Lyon on Sunday to be delayed.

French football has also been rocked in recent years by allegations that star attacker Karim Benzema took part in an attempt to blackmail national teammate Mathieu Valbuena with a sex tape.

Benzema, who went on trial last month, denies the allegations. A verdict is expected on November 24.