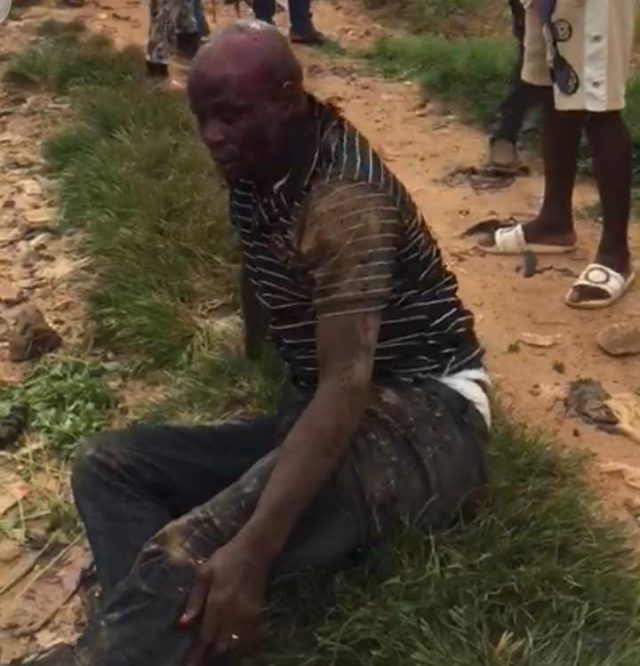 A policeman was on Wednesday beaten to a pulp for allegedly pushing a father and son inside the gutter in Osogbo, Osun State Capital.

According to the information gather by CityMirrorNews, the police was trying to calm frayed nerves of an irate mob after the incident but to no avail.

According to an eyewitness, the police officer was attacked and beaten up while trying to flee the scene of the incident.

It was also gathered that, the mob descended on the policeman for allegedly causing the accident at Owo-Eba area along Ilesha road.

It was gathered that a team of police who were not in uniform was at a checkpoint when the incident happened.

A resident of the community told narrated that:

“A father and his son were on a motorcycle when a police officer suddenly stopped them and threatened to shoot them if they refuse to comply.“

They stopped and the policeman struggled with the handle of the motorcycle with the son of the man. In the process, they fell inside the gutter and the father had a fracture on his leg.

“The scene infuriated angry mob in the area and they descended on the police officer who caused the accident by beating him to a pulp.”

In a short video seen by CityMirrorNews, the policeman, drenched in blood, was attempting to rise from the floor to no avail.

The 48-year-old victim, Hamzat Kazeem, narrated how the incident happened when our Correspondent visited him at the local bonesetter in Osogbo.Kazeem explained:

“I was on my way to farm with my son riding a motorcycle when a police officer at a checkpoint along Ilesha road threaten to shoot him, I told him that he should be calm but the police pushed us inside the gutter and I fractured my leg.“

At that point, I could not stand again. I immediately held him because he wanted to run. He was pleading with me to allow him to go.

He even promised to take care of my health. Other policemen took me here. Some policemen had come around to also talk to me.”

When the Field Commander of Osun Amotekun, Comrade Amitolu Shittu was contacted, he confirmed he deployed three patrol vehicles to the area to restore peace.

However, the spokesperson of Osun State Police Command, SP Yemisi Opalola could not be reached as at the time of filing this report