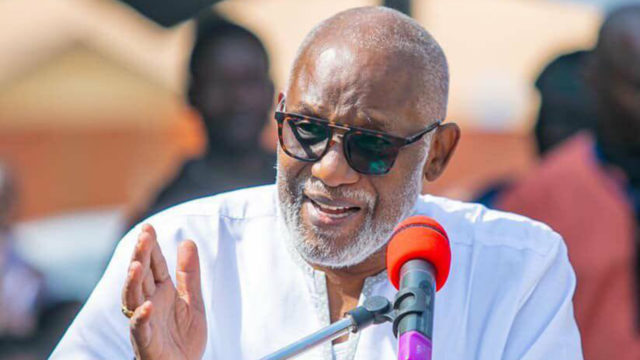 The Ondo State Governor, Mr. Oluwarotimi Akeredolu, has been receiving knocks over the recent increase of the tuition fee of the state-owned University of Medical Sciences Teaching Hospital, Ondo, which required non-indigenes and indigenes studying dentistry in the institution in the preclinical years to pay N2.245 million and N1.320 respectively.

The development was described as shocking, inhumane and unacceptable by students, parents and opposition party.

Meanwhile, the Vice-Chancellor of the University, Professor Adesegun Fatusi, has stated that “there was no going back on the new fee schedule, stressing that the new fee was for students to be admitted to the new academic session and in line with the institution’s commitment to offering quality education.“

The parents have an option. It is not compulsory for their children to study here. Other medical schools are available.

“We run this school almost free of tuition fees. This school is a specialised school and we cannot continue with the previous fees,” Fatusi said.

A student of the institution, Mr. Ajayi Kehinde, told THISDAY that “we were paying N350,000 and it was difficult, how does the government want our parents to get this huge amount of money from? This must be looked into.”

A parent who identified herself as Mrs. Adewole, called on the state government to rescind its decision for the interest of the poor masses.

Reacting, the Peoples’ Democratic Party (PDP) in the state tackled Akeredolu over astronomical hike in the fees, noting that the hike is a silent notice to parents who could not afford the new fees regime to withdraw their children.

The statement that was signed by the State Publicity Secretary of PDP by Mr. Kennedy Peretei, reads: “Mr. Rotimi Akeredolu has never hidden his penchant for increasing fees in tertiary institutions since he assumed leadership of the State.

“The Rufus Giwa Polytechnic, Owo shrank to a student population of 1,753 from over 9,000 due to fees increase. Most private residential accommodation for students in Owo is now empty. Even the economy of the ancient city has been adversely affected.“

Parents and students of UNIMED received shockers of their lives when they noticed increment of fees with nearly 120 per cent for 2021/2022 session. No explanation was given for this hike.

The party noted that “at Ekiti State University, Ado-Ekiti students of Medicine and Surgery require only N468,750.00 for 2021/2022 Session. For Olabisi Onabanjo University, Ago-Iwoye N176,396.00 will be enough for the same