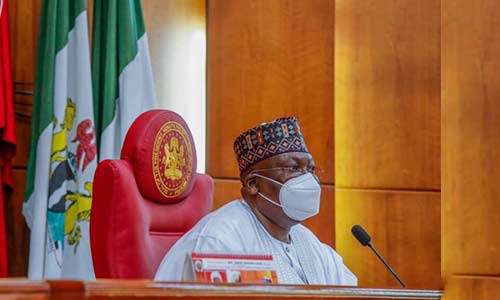 The Senate has condemned the invasion of the Abuja home of Mary Odili, a justice of the supreme court.

The upper legislative chamber condemned the incident after Betty Apiafi, senator representing Rivers West, drew the attention of her colleagues to the invasion.

Security operatives on October 29 invaded the house of Odili on the claim that “illegal activities” were going on there.

Abubakar Malami, attorney-general of the federation (AGF), and the Economic and Financial Crimes Commission (EFCC) denied involvement in the raid.

Malami and Usman Baba, inspector-general of police (IGP), had ordered probes into the incident.

While moving her motion on the floor of the upper legislative chamber on Tuesday, Apiafi expressed concern that there has been no report on the findings so far made by the police on the invasion.

“There is no information on the arrest said to be made,” she said.

On his part, Opeyemi Bamidele, chairman of the committee on judiciary, said those found culpable must face the law.

“No one was at ease with what has happened. The government should take appropriate steps to ensure that those culpable are brought to book,” Bamidele said.

“There is need to protect the sanctity of the judiciary.”

Also speaking, Thompson Sekibo, senator representing River north-east, said the findings on the invasion made by the police must be made public.

“A couple of months ago, Justice Mary Odili’s residence was also invaded. Several reasons were given for that. Again her house in Abuja was also invaded. They claimed to have brought a warrant in Abuja,” he said.

“There was a claim that the minister of justice was aware of it but he denied. The IGP said he has done some arrest and they are investigating the matter.“

Most times we hear of investigation and we don’t see the result. Fear is one of the causes of death.

“Let them make the investigation public. Let us also pray that this does not cause fear to Mary Odili and other judges.”

Thereafter, the senate asked the IGP to disclose the findings of the investigation into the incident as soon as possible