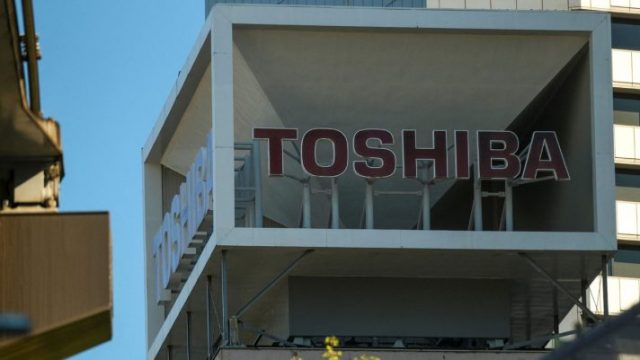 The logo of Japanese industrial group Toshiba is seen on top of a building at its headquarters in Tokyo on November 12, 2021.

Toshiba’s board has approved a plan to split the storied Japanese conglomerate into three companies, it announced Friday, following tension with shareholders and a controversial takeover offer.

The announcement confirms reports earlier in the week that said management was under pressure from shareholders to maximise the firm’s value by dividing its businesses.

The proposal aims to spin two companies off from the rest of Toshiba’s operations, one focused on infrastructure and the second on devices.

The move is expected to take two years, with the goal of listing both new companies, Toshiba said.

“The separation allows each business to significantly increase its focus and facilitate more agile decision-making and leaner cost structures,” the company said in a statement.

“As such, both companies will be much better positioned to capitalise on their distinct market positions, priorities and growth drivers to deliver sustainable profitable growth and enhanced shareholder value.”

The decision comes after months of tumult for the company, including the ouster of its board chairman and revelations that management sought to enlist government help in blocking shareholder action.

Analysts said it was the result of pressure from activist investors who believe the move will boost the value of Toshiba’s shares.

They want “moves to shake the company up and get investors to reevaluate it and hopefully get a higher share price,” said LightStream Research analyst Mio Kato, who publishes on Smartkarma.