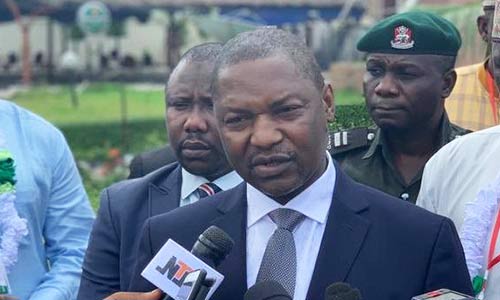 A clique in the Federal Ministry of Justice has been reportedly selling off forfeited and retrieved assets owned by the Nigerian Government.

An investigation by The PUNCH revealed that the syndicate, comprising top justice ministry officials, including directors, a Senior Advocate of Nigeria (name withheld) and political aides to the Attorney-General of the Federation, Abubakar Malami, SAN, has allegedly been disposing off some properties mostly in Abuja and Lagos, and pocketing the proceeds.

It was gathered that former members of the non-existent Ad Hoc Committee on the Sale of Non-essential Federal Government of Nigeria Residential Houses in Abuja were also involved in the property racketeering going on in the ministry. The committee was disbanded in 2014 but its members were said to be deeply involved with senior officials of the ministry in illicit property deals.

A source in the ministry told the newspaper that the members of the syndicate, who had access to title documents of forfeited and recovered properties, had been making millions of naira from disposing government properties in exchange money.

The source stated, “The former committee members give people offer letters, which they use in obtaining Certificates of Occupancy on government properties. When you trace it, you find that payments on the affected properties are not made to the government. The syndicate members are simply pocketing the proceeds from the sales of those properties.

“The impunity going on is mind-blowing, but the AGF, unfortunately, is not aware of how his aides have been using his name and office to perpetrate all manner of illegal activities. Come to the ministry and see all manner of characters sealing eye-popping deals on government properties. It is shocking.”

The modus operandi of the gang, it was learnt, involved doctoring the dates on property titles by backdating them to the year 2013 and thereabouts, before selling off the properties at below market prices.

According to the report, a recent deal carried out by the officials and their accomplices involved some buildings estimated at over N2 billion, which were allegedly sold for less than N1 billion.

The source disclosed that they were allegedly shared by the syndicate members, which included a female deputy director known to be close to the AGF.

Findings also proved that the Inter-ministerial Committee on Disposal of Forfeited Assets, which claimed to have marked for auction 1,620 forfeited properties in 25 locations across the country, might have under-reported the number of recovered properties in Abuja.

The committee had reportedly claimed that less than 100 properties forfeited in Abuja would be auctioned alongside others, but an official put the number of confiscated properties in the nation’s capital at over 500.

Only in October, the Chairman, Independent Corrupt Practices and Other Related Offences Commission ICPC), , Prof Bolaji Owasanoye, disclosed that the anti-graft agency recently recovered over 300 houses from two civil servants in Abuja.

Owasanoye, who spoke at a public hearing on real estate organised by the House of Representatives Ad Hoc Committee on Investigation of Operations of Real Estate Developers in the FCT, stated that public officers were using real estate developers as conduits for illicit financial flows.

Attempts by our correspondent to ascertain the number of properties recovered and submitted to the committee were rebuffed by the Economic and Financial Crimes Commission (EFCC) as the anti-graft agency referred all inquiries to the committee members.

The AGF had on November 9, 2020, inaugurated the inter-ministerial headed by Dayo Apata, SAN, the erstwhile Permanent Secretary in the Ministry of Justice, who retired in July.

The committee, which included representatives of the Presidency, the police, Navy, the EFCC, the ICPC as well as ministries of finance, justice, works and housing, among others, had a mandate to collate and dispose of all assets permanently forfeited to the Nigerian Government within six months.

But one year after its inauguration, the committee said it was still in the process of carrying out the disposal of assets, including landed property, plants, machinery, vehicles, electronics, furniture, ships and equipment.

Briefing journalists last month, the new chairman of the committee, Umar Mohammed, announced that 68 independent valuers had been shortlisted for the forfeited assets.

But a licensed auctioneer, who participated in the exercise, said the committee had already awarded auction slots to certain persons to handle the sale of the properties, noting that the process for the disposal of the assets was less than transparent.

A source in the justice ministry corroborated the auctioneer, saying some of the assets had been sold off to cronies and fronts, adding, “The announcement by the committee was just a mere formality.”

Mohammed declined to speak when asked about the alleged illegalities going on in the ministry.

“Come to my office on Monday; but if you don’t like, do whatever you like,” he had told the newspaper on Saturday.

The media aide to the Minister of Justice, Umar Gwandu, could not be reached for comments as calls to his phone rang out. He had yet to respond to an SMS sent to his mobile phone as of the time of filing this report.