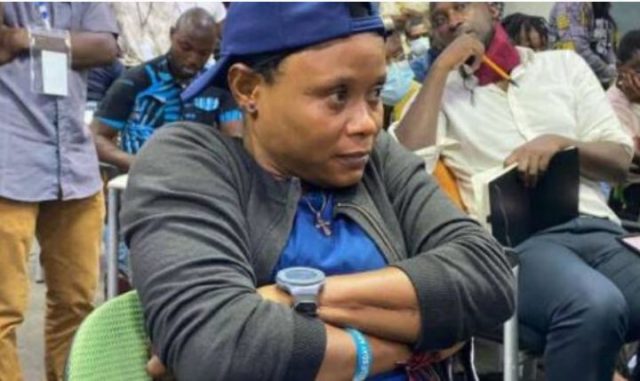 Kamsichukwu Ibeh, an #EndSARS protester who testified before the Lagos judicial panel on police brutality, has been stabbed by suspected hoodlums.

She was said to have been attacked on Sunday evening in the Sangotedo area of Lagos while she was heading home from work.Ibeh testified before the Lagos panel on November 21, 2020 regarding the Lekki tollgate shooting. In a video seen by Cable, Ibeh, who had machete cuts on her hands and parts of her body, was seen crying as she narrated how she was attacked.

“Last night, I was attacked on my way back from TNS by the three guys who I thought were passersby,” she said.Ibeh said while she was at the bus stop, the men identified her as the “girl from the panel”.

“He said if they kill me, they will see how I will continue to agitate for justice. They started cutting me like I am a thief,” she said.

“I survived by the grace of God. I thought I would die at that bus stop.”

Adesina Ogunlana, a lawyer and human rights activist who represented Ibeh at the judicial panel, said her attackers came “with identity and with purpose”. The lawyer said Ibeh was attacked because of her testimony.

Ogunlana, the former chairman of the Nigerian Bar Association (NBA), Ikeja branch, said the incident is an attempt to silence protesters.“

Yesterday night, enemies of the #EndSARS movement and protest launched a murderous attack on one of the leaders of the movement, Kamsichukwu Ibeh,” she said.

“The attackers were not criminals who came to rob her of personal effects, neither were they rapists. The criminals came with identity and with purpose.“

As they were macheting and cutting her the three assailants said, ‘we know you. Since you #EndSARS people have been warned to stop and you didn’t, when you die, go and continue in heaven’.

“They inflicted serious matchet cuts on her and left her for dead. That Kamsi is still alive is only by the grace of God.”

Earlier on Monday, Ebun-Olu Adegboruwa had alleged that there is a threat to his life over the report of the Lagos judicial panel.

Adegboruwa, a senior advocate of Nigeria (SAN), was a member of the panel.

Last Monday, the panel submitted two documents — a consolidated report on cases of police brutality and another on the Lekki shooting incident — to Babajide Sanwo-Olu, governor of the state.

In the 309-page report which was leaked to the public, the panel said the “killing of unarmed protesters by soldiers on October 20, 2020 could be described in the context of a massacre”.