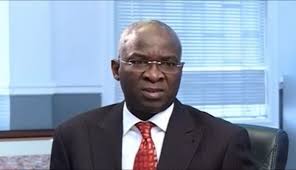 The Minister of Works and Housing, Mr. Babatunde Fashola, says he does not know what happened to the video camera he recovered at the Lekki tollgate after the #EndSARS protests.

Fashola said this during an interview on Arise Television which was monitored by our correspondent.

The former governor of Lagos State, who had visited the state in October last year to assess the damage caused by hoodlums, spotted a camcorder at the toll plaza which he handed over to a government official. The viral footage of Fashola’s “recovery” became a meme on social media and trended for several weeks.

When asked what became of the camera, Fashola responded, “You should not be asking me. You have the tapes showing that I handed it over to the government of Lagos so you have all the recordings. I think your people were there. So don’t ask me what happened to the camera. I don’t know.”

On what he thought about the struggle by the youths to take power in 2023, Fashola said youths had ruled Nigeria more than the elderly.He recalled that during the military regime, the officers who ruled Nigeria through the 1960s and 1980s were in their 30s and 40s.