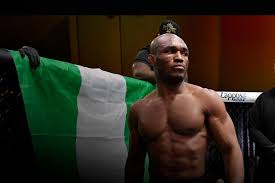 He won the Ultimate Fighting Championship after defeating Colby Covington in the early hours of Sunday to retain his UFC Welterweight title.

‘The Nigerian Nightmare’ won via unanimous decision, winning on the scorecard of all three judges in what was a rematch of their epic first meeting.

It was nearly two years since the last time Usman and Covington stepped into the Octagon against one another. Back then Usman won via a fifth round KO.

Covington has fought just once since that December 2019 clash, squaring off against Tyron Woodley on Sept. 19, 2020. He beat Woodley by TKO in five rounds.

Usman though, since beating Covington, has won three fights, one by KO, another by TKO and another by decision. His most recent fight came against Jorge Masvidal, when he won by knockout on April 24, 2021.