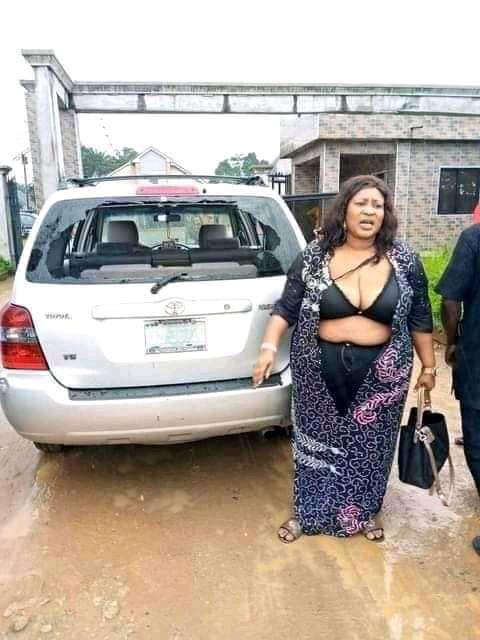 Mrs Cynthia Nwala, the leader of Etche Local Government Legislative Assembly in Rivers State was beaten and nearly stripped during a fracas at the council secretariat on Monday. At the height of it, her car was also vandalized.
Nwala alleged that it was the Council Chairman, Obinna Anyanwu, who ordered his Chief Security Officer, CSO, Prince Chinedu Onyeche to beat and strip her.
While speaking to journalists via telephone on what led to the fracas, Nwala said after she and other councillors screened nominees for appointment as supervisory Councillors and special assistants, she decided to go home with the mace of the assembly due to some rumours that it might be hijacked by hired thugs to impeach her.
Nwala alleged that the Deputy Leader of the Legislative Assembly, in cohort with some Councillors and the Chairman of Council had also wanted to remove her from office because she hails from Ikwerre ethnic nationality and not from Etche, though she is married to an Etche man.
She added that she also decided to go away with the mace because the Council Secretariat is under renovation as the Leader of the Legislative Assembly. But Nwala said as she was leaving the Council Secretariat, the Council Chairman ordered his CSO to beat and strip her naked, while her car was badly damaged.
However, the Chairman of the Council denied the allegations of being the mastermind of the incident. He claimed that his Officer intervened in the fracas between Nwala and her colleagues to calm a charged situation. The LG Chairman said Nwala was trying to take the mace to her house when her fellow councilors accosted her and this led to the fracas.
In a press statement signed by Robinson Oluor, his Chief Press Secretary, the Etche council boss further reiterated that he never directed his Chief Security Officer to harass, intimidate or assault any serving Councillor of the Etche Legislative Assembly.
“The Chief Security Officer to the Council Chairman is not a member of Etche Legislative Assembly and will never be part of the internal issues of Etche Legislative Assembly. It is also important to clearly state that the Chief Security Officer to the Council Chairman never attacked or harassed the Leader of the House; as he is not one of the councillors and the Etche Local Government Council leadership has much respect for the Etche Legislative Assembly”. Anyanwu added that he has launched an investigation into the matter.
However,the Nigerian Association of Women Journalists (NAWOJ), Rivers State Chapter, has condemned the brutal attack unleashed on Nwala. NAWOJ, in a statement signed by its chairperson, Mrs Susan Serekara- Nwikhana, described the attack as not only barbaric, but an unpardonable assault on womanhood.
The NAWOJ boss said the association would not condone any act capable of demeaning womenfolk in the society. According to her, “looking at how the woman was assaulted, beaten to the point of being stripped naked is barbaric, condemnable and should not be treated with kids gloves. It is so painful to see a married man molesting and embarrassing another man’s wife in such a horrible manner and at the same time vandalising her car at the Etche Council Secretariat with thugs”.
“We decided to issue this statement based on the information confirmed to NAWOJ by the victim, Rt. Hon. Mrs Cynthia Nwala that the Chief Security Officerto the Council Chairman, Prince Chinedu Onyechi, acted based on the directives given to him by the Etche council boss, Hon. Obinna Anyanwu, shortly after the screening of the Special Advisers and Supervisory Councillors at the Etche Local Government Council, Okehi.We gathered the woman’s offense was just because she decided to go with the mace for security reasons as Councillors offices were dilapidated and presently under renovation”, NAWOJ stated.
Mrs Serekara-Nwikhana called on the civil society organisations, the International Federation of Women Lawyers (FIDA) and the Rivers State Police Command to rise up to the occasion and ensure that the Etche Local Government Council Chairman, Hon. Obinna Anyanwu and his Chief Security Adviser, Prince Chinedu Onyechi, face the full wrath of the law.
“Justice must be served appropriately irrespective of who is involved so as to serve as a deterrent to men who derive pleasure in assaulting, molesting and embarrassing women in our society”, NAWOJ insisted.
[carousel_slide id='8496']