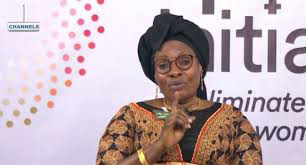 The Federal Government has restated its resolve to abolish all forms of violence and harmful traditional practices endangering the health and dignity of girls.

Minister of Women Affairs, Pauline Tallen, pledged shortly after a five-kilometre walk to create awareness on Female Genital Mutilation and cancer on Saturday.
The exercise, which took place in Abuja, was in collaboration with the Women Against Violence and Exploitation Foundation and the United Nations Population Fund.
According to her, Nigeria has one of the highest rates of FGM with related complications that has exposed women to reproductive health challenges such as bleeding, genital tissue swelling/fever, infections, infertility, among others.
She noted that despite government laws and reforms against the harmful traditional practices, many cultural and religious practices still put the health of women in the doldrums.
“In spite of Government and partner’s positive interventions, high and community-level advocacy, capacity building of circumcisers, including the provision of alternate income for circumcisers, FGM practise persists in our society.
“We need to provide more education by increasing advocacy on the health danger posed on girls and women by the practice of FGM.
“I wish to state that the Ministry is committed to abolishing all traditional practices that endanger the health and dignity of girls and womanhood in Nigeria and in this regard will work more with the Ministry of Health,” she said.
While commending the organisers, the minister called on stakeholders to continue to provide support for girls and women suffering from complications of FGM, cancer and all forms of violence against women and girls.
Similarly, Ulla Mueller, UNFPA Country Representative, described FGM as a gross human rights violation, and an extreme form of gender inequality meted out to women and girls.
Ms Mueller said eliminating FGM practice will help in actualising the Sustainable Development Goals (SDGs) targets on health and well-being, quality education, gender equality, decent work and economic growth.
She added that access to digital skills would provide information to develop positive behavioural relationships that would contribute to the elimination of FGM in Nigeria.
Emmanuel Babayaro, former Nigerian footballer, also stressed the need for notable Nigerian celebrities to join in the fight against FGM and other forms of violence against women and girls.
In the same vein, Angela Peabody, Executive Director, Global Women Peace Foundation, said the walk was to raise more awareness, globally on the ills of FGM as it affects the Girl-Child, women and the nation.
Ms Peabody, represented by Ms Lola Ibrahim, President, WAVE Foundation, said the walk simultaneously took place in Washington DC, U.S., and Nigeria.
(NAN)
[carousel_slide id='8496']