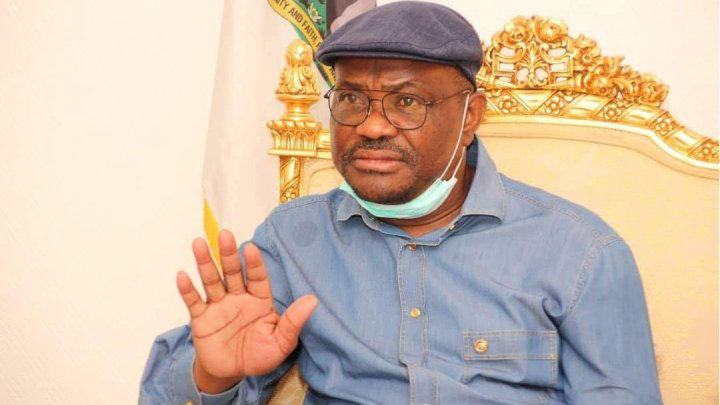 Governor Nyesom Ezenwo Wike of Rivers State has said that the state is not at war with Nigera or any of its components over the dispute on the authority to collect Value Added Tax (VAT) as being insinuated in some quarters.

Wike however said emphatically that Rivers State is not a slave to the Federal Government and would continue to pursue what is right and legitimate within the ambit of the constitution.
The governor, who spoke at a public lecture on “Taxing Powers in a Federal System” held in Abuja at the weekend, insisted that Rivers and the Federal Government are co-equal because they derived their life from the constitution of the Federal Republic of Nigeria
He spoke through the Attorney General and Commissioner for Justice in the state, Professor Zacheus Adangor, a Senior Advocate of Nigeria (SAN).
The governor said “I have heard a lot of comments been made that we are fighting the federal government, there is no desire or any intention of the Rivers state government to fight the federal government but you must remember that in a federal system, states are not house boys of the federal government.
“The principle of co-equality is fundamental to the federal arrangement, that principle leads to the principle of autonomy, autonomy leads you to physical autonomy and physical autonomy leads you to physical federalism and when you put all the principles together, what it means is that each level of government, whether federal or state are co-equal because none derives its life from the other.
“They both derive their life from the constitution because they have co-equality and every level of government is entitled to have access to sufficient revenue so that they can carry out its own responsibility without subordinating its will to that of a superior authority.
“That is the fundamental aspects of physical federalism and until we get it, we will continue this journey of talking and talking without result but I think that the court has a role to play, the court can lay this crises and controversy to rest when it makes a pronouncement.
“The taxing system of ours appear to capture is one that will do homogenization and that certainly is not what we agreed upon at the constitutional conference and so when you look at the constitution, and in matters of taxing, there are no grounds for inference, there must be a specific donation of legislative power.
“Can we say that the Federal Government has the power to impose and collect those taxes that the court struck down in Port Harcourt?
“Certainly not, and so for me, we need to resolve this issue through the courts and that is what Rivers state has opted to do and we encourage as many states as possible to join us in this new revival of the Nigerian federal arrangement so that we can lay some of these issues to rest.”
The guest lecturer at the occasion and professor of Commercial Law, Professor Abiola Sanni, appealed to the Nigerian judiciary to make a definite and definitive pronouncement on the impasse surrounding tax collection in Nigeria’s federal system.
The tax expert also called on the National Assembly to use the ongoing constitution amendment to bring out clear taxing powers among the three tiers of government.
He accused the state governments of abusing their powers to deny local governments of statutory powers to collect taxes at the level of the government.
[carousel_slide id='8496']