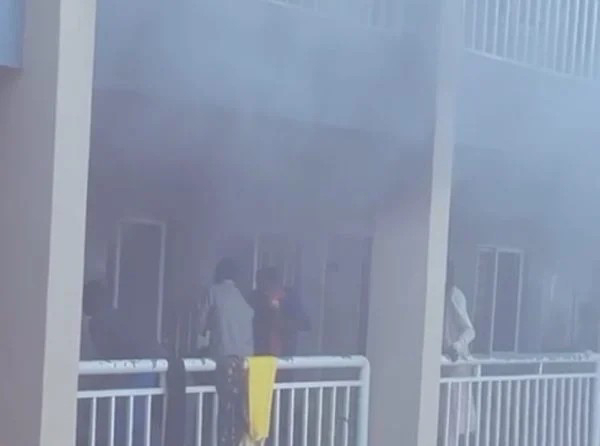 Female hostels at the University of Maiduguri (UNIMAID)was on Thursday gutted by raging fire.

It is understood that the fire began around 3:10 pm at the hostel identified as Aisha Buhari lodge.
The conflagration was said to have destroyed students’ documents, clothes, hostel buildings and other properties in the process.
As of the time of this report, it remains unclear what caused the fire outbreak.
TheCable Lifestyle learnt that it took the joint efforts of the varsity’s fire service team, security operatives as well as the students to put out the fire about an hour later.
In a clip of the incident obtained by TheCable Lifestyle, some female students were seen standing in groups as they discussed the damage caused by the fire.
An occupant of one of the affected rooms, who spoke on the condition of anonymity, also lamented that she was not able to save any of her properties from getting burnt.
“I was not able to save anything, all my properties were burnt including documents,” she said.
The student alleged that lack of enough water around the affected hostel initially made it difficult for those who came to rescue the situation.
The institution is yet to react to the incident.
The varsity was recently in the news after management reportedly cracked down on students protesting tuition hike.
[carousel_slide id='8496']