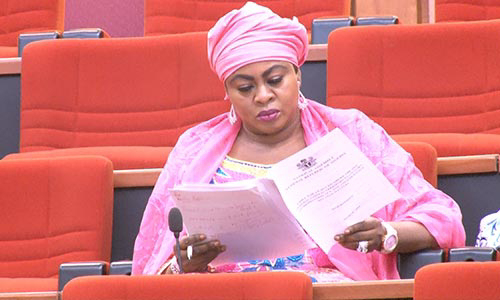 Pandora Papers, one of the biggest leaks of financial documents in the world, has uncovered how Senator Stella Oduah secretly acquired mansions in London.

According to the investigation led by the International Consortium of Investigative Journalists, including more than 600 journalists, some from PREMIUM TIMES, seven London properties are connected to Oduah.
One of the properties is said to be in her name, two through her Nigerian-incorporated firm, and four secretly through her Seychelles offshore company.
International Trading and Logistics Company Limited (ITCL) was incorporated in Seychelles, a commonly used secrecy and tax haven, with Oduah as the ultimate beneficial owner.
She reportedly used the company to acquire the four London properties worth a total of 6.7 million pounds between October 2012 and August 2013.
At the time, Oduah was a minister in the government of ex-President Goodluck Jonathan.
Governors Mai Mala Buni (Yobe) and Hope Uzodinma (Imo) welcoming Oduah to APC. They are joined Senator Andy Uba, governorship candidate of APC in next month’s Anambra election.
She served as Minister of Aviation between 2011 and 2014 when she was fired over massive corruption scandal.
Oduah was indicted by two panels, which probed the purchase of two bullet-proof cars by the Nigerian Civil Aviation Authority (NCAA), an agency under her supervision, for N255 million in violation of Nigeria’s public procurement and appropriation laws.
According to the UK Land Registry records, on October 19, 2012, ITCL bought a house at 23 St Edmunds Terrace, London, NW8 7QA for 5.3 million pounds.
Then, in the following year, 2013, between August 6 and 15, the following three more properties were bought in the name of ITCL:
Flat 2, 7 Devonshire Terrace, London (W2 3DN)
Bought: on or around 06/08/2013
Price paid: £378,000.
Top Floor Flat, 89 Brondesbury Villas, London (NW6 6AG)
Bought: on or around 12/08/2013
Price paid: £369,000.
Fourth Floor Flat, 19 Warrington Crescent, London (W9 1ED)
Bought: on or around 15/08/2013
Price paid: £680,000.
“Records show that none of the four properties was bought with mortgage financing, meaning Ms Oduah secretly routed 6.7 million pounds through her offshore company to anonymously effect the acquisitions.”
“Ms. Oduah’s houses are among the 234 U.K. properties our collaborative investigation showed were anonymously acquired by offshore companies, with Nigerians as ultimate beneficial owners. The investigation exposed the hidden identities of the true owners of the properties bought in the so-called envelope structure that offers confidentiality benefits, which in the case of Nigeria public servants like Ms. Oduah, mean a way of blocking the Code of Conduct Bureau from knowing undeclared assets,” PREMIUM TIMES said in its report.
Before her acquisition of the above four properties, Oduah had bought in her own name, on March 8, 2006, Apartment 209, Cavendish House, 31 Monck Street, London SW1P 2AS for 700 thousand pounds, Land Registry record shows.
On September 14, 2012, about one month before the purchase of the 5.3 million pounds Edmund Terrace property, SPGCL wired $71,973 bank transfer to Daniel Ford & Co., a UK property agency commonly used by Nigerian business and political elites investing in the UK property market anonymously, according to a leaked suspicious activity report submitted by Deutsche Bank to the U.S. financial intelligence agency FinCEN.
Deutsche Bank had helped facilitate the U.S. dollar transfer, acting as a correspondent bank. Reporting that Oduah is the owner of SPGCL in its suspicious activity report, Deutsche Bank reportedly said it suspected the payment to Daniel Ford was money laundering.
Meanwhile, as she used ITCL Seychelles, she also invested in the UK property market through ITCL Nigeria, also while serving as minister. On July 12, 2011, just days after her assumption of office as aviation minister, she used ITCL Nigeria to buy Flats 303 and 306 Grant House, 90 Liberty Street, London SW9 0BZ for 475 thousand pounds each.
The newspaper said the senator, who defected from the Peoples Democratic Party (PDP) to the All Progressives Congress (APC) in August, did not respond to inquiries on the issue.
Oduah currently represents Anambra North at the upper chamber of Nigeria’s National Assembly.
[carousel_slide id='8496']