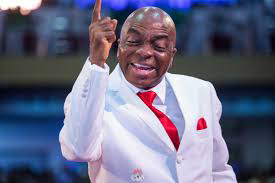 Mr Oyedepo recently said money had never been a problem for his church. This is the story of the family-owned company based in BVI.
After Chris Oyakhilome of Christ Embassy and the late Temitope Joshua, the founder of Synagogue Church of All Nations, David Oyedepo, the founder and general overseer of Living Faith Church Worldwide, is the latest Nigerian mega-preacher found to have set up a family offshore company in the British Virgin Islands.
Mr Oyedepo’s offshore company popped up as part of the ongoing global Pandora Papers reporting project, led by the International Consortium of Investigative Journalists (ICIJ) and in which PREMIUM TIMES is a key participant.
The leaked files were retrieved from some offshore services firms around the world that set up shell companies and other offshore entities for clients. In August 2007 Mr. Oyedepo contracted the services of Business Centrum Limited, a London-based agent, to help him set up a company in the infamous tax haven for him and his immediate family.
Read also:Pandora Papers: 2013 Reports on Pastor Chris Oyakhilome
Business Centrum subsequently subcontracted Trident Trust Group, one of the world’s leading secrecy enablers and one of the most notorious providers of offshore corporate and financial services.
The company, Zadok Investments Limited, was set up on August 20, 2007 with 50,000 ordinary shares with a value of $1.00 each.
The directors of the company are Mr. Oyedepo and his two sons – David (junior) and Isaac, every member of Mr. Oyedepo’s family are listed as shareholders.
Mr. Oyedepo may have tapped the name of his offshore company from the Bible. According to the books of 2 Samuel, 1 King and Ezekiel.
The cache of documents did not reveal what type of business the company was set up for, some of the documents revealed that the company was still active at least as recently as 2016 when Trident Trust filed a resolution of the company’s board revalidating its list of directors.
Meanwhile, Mr. Oyedepo, who felt “insulted” by his $150 million valuation by Forbes Magazine in 2011, is one of the main proponents of prosperity gospel in Christendom and encapsulates this by his myriad of entrepreneurial endeavours.
Recently, while reacting to reports that some of the church’s pastors were sacked without benefits, Mr. Oyedepo, who described the sacked pastors as “unfruitful” and “blatant failure”, said his church had never lacked money.
“Money? Nonsense! We’ve never lacked it and yet we’ve never prayed for it. We are just simply obeying God and he is backing up what he asks us to do.”
“Obedience will turn you to a living wonder. Just obey God. Have you seen us raise a prayer point of Oh God send us money?,” he asked later during the speech.
Outside his evangelical work, he is mainly known as the founder of one of Nigeria’s most expensive universities, Covenant University. He also owns Landmark University, in Omu-Aran, Kwara State.
He also owns Faith Academy Limited alongside his wife, Faith. Faith Academy Limited is the company that runs the highbrow boarding secondary school that goes by the same name.
Mr. Oyedepo is also known for his acquisition of at least four private jets.
Dominion Air Limited was set up in 2005 and his second son, Isaac, is listed as one of its directors.
Mr. Oyedepo is also the owner of Hebron Oil Limited and a slew of other businesses mostly located in his Canaanland estate in Ota, Ogun State.
[carousel_slide id='8496']