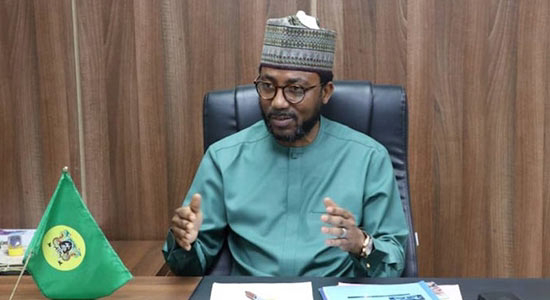 This was revealed in a Pandora Papers project led by the International Consortium of Investigative Journalists (ICIJ), and which Premium Times is a part of.
In the course of the project, leaked documents were retrieved from 14 offshore services firms around the world.
Bello-Koko was appointed as acting MD of NPA following the suspension of Hadiza Bala-Usman reportedly over her disagreement with Rotimi Amaechi, transportation minister earlier in the year.
According to Premium Times, the leaked documents revealed that Bello-Koko and his wife, Agatha Anne Koko, enlisted the services of financial secrecy seller, Cook Worldwide and Alemán; Cordero; Galindo & Lee (Alcogal), an offshore law firm, to secretly register Coulwood Limited (reg. number: 1487897) and Marney Limited (reg. number: 1487944) in the British Virgin Islands (BVI), one of the world’s most commonly used tax havens in 2008. Both companies were registered the same day — June 19, 2008.
The regulators in the BVI also had his companies under watch for suspected money laundering — a problem Alcogal reportedly helped him tackle with some misinformation provided to the regulators.
Using the two companies, Coulwood Limited and Marney Limited, tucked away offshore, Bello-Koko was said to have anonymously acquired five London properties.
The newspaper said four of the properties were acquired between 2009 and 2012, and that Bello-Koko potentially exploited UK tax loopholes that allowed the owning of UK properties using so-called envelope structure, that is, anonymously owning properties through offshore companies.
”For instance, up to 2012 when George Osborne, former UK finance minister, declared new rules, owning property via an offshore company meant that ownership could be transferred by selling the company’s shares rather than the property itself, and in doing so, no UK property sale tax or capital gains tax will be paid,” it said.
Before joining the civil service, Bello-Koko was a banker with the responsibility for managing accounts of energy firms at the defunct FSB International Bank and later Zenith Bank, where he managed Rivers state government accounts in Nigeria’s oil-abundant Niger Delta region.
Although shell companies have been a key feature in illicit financial flow and are used to facilitate drug deals and terrorism financing, owning one is not necessarily illegal and can be for legitimate purposes.
So as at the time he acquired the shell companies and the first four UK properties, he was still in the private sector and therefore did not violate Nigerian law.
But one of the properties was said to have been acquired in May 2017, after Bello-Koko took up an appointment at the NPA. He was appointed executive director for finance and administration in 2016 and later acting MD in 2021.
According to the report, Bello-Koko first used Marney Limited to acquire Flat 2, Liberty Court, 141, Great North Way, London NW4 1PR with an FBN UK mortgage, on October 20, 2009, and, then on July 23, 2012, 62, Manton Road, Enfield, London EN3 6XZ mortgage-free (with cash). Both properties cost 275,000 pounds and 280,000 pounds, respectively, when they were acquired.
Using the second company, Coulwood Limited, Bello-Koko also reportedly bought three other London properties, namely 62 Corner Mead, Hendon, (NW9 5RD) on November 25, 2008; 37 Redlands Road, Enfield (EN3 5HN) on August 16, 2011; and 14, Faraday House, Aurora Gardens, London (SW11 8ED) on May 3, 2017.
He allegedly paid 205,000 pounds for the 2011 Enfield property, and 235,000 pounds for the 2008 Hendon property which he sold, according to records, in May 2017 for 350,000 pounds.
For the third, the 2017 Aurora Garden property, he allegedly paid 475,000 pounds, being his largest single investment in the UK property market. This was acquired after his NPA appointment.
Analysis of the investments shows that between 2008 and 2012, he had allegedly spent on four London properties a sum of 995,000 pounds, an equivalent of 293 million Naira at the 2015 exchange rate of 294 Naira to a pound.
Again, none of these properties was acquired in his name.
Bello-Koko’s companies, Marney Limited and Coulwood Limited, were among nine companies apparently placed under watch by the Financial Investigation Agency (FIA), the regulator in the British Virgin Islands.
On January 20, 2017, FIA sought information about the affected companies owned by Nigerians, Panamanians, and Russians from their registered agent, Alcogal, documents showed.
On January 27, 2017, the pieces of information requested by FIA, including identities of the beneficial owners, directors, and shareholders with their passports and permanent residence information, were sent via a letter signed by Alcogal’s money laundering reporting officer, Blondell Challenger.
Of all the nine companies, only Marney and Couldwood have the same persons – Bello-Koko and his wife Agatha – as directors, shareholders, and ultimate beneficial owners, Alcogal was said to have told FIA.
Alcogal then told FIA that the nine companies “do not have any bank accounts or assets held in their name”.
In a March 30, 2017 correspondence, Alcogal sent “updated KYC (Know Your Customer) documents” for Coulwood and Marney, attaching Bello-Koko’s Nigerian passport information page and reference letter from the First Bank (UK) Limited.
The First Bank’s letter dated March 27, 2017, and addressed to Alcogal described Bello-Koko and his wife as “valued client of our Bank since 2010” and added that “they have always demonstrated a high degree of integrity and capability”. The bank mentioned the couple’s Port-Harcourt-Nigeria address. But there was no mention of his public service role.
[carousel_slide id='8496']