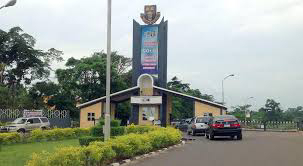 University Senate of Obafemi Awolowo University put on hold, the swearing of the newly elected students union following the protest that rocks the Varsity
According what is gathered by iDeemlawful News, the decisions were during an emergency meeting on Tuesday 5th October 2021 to review the situation on campus.
The new decision were made following its earlier pronouncement of the management that students should vacate the hall of residence, the school campus latest by 12noon on Saturday 2nd October 2021
This was disclosed in a letter sent from the University Senate to the registrar and signed by the registrar Mrs. M.I. Omosule On Tuesday 5th October 2021 with ref no: RO.2/Vol.VII/182.
According to the letter, Senate expressed sadness over the untimely demise of Miss Omowumi Aishat and Commiserates with the family on the loss.
The Senate thereby observed a minute silence in her memory.
“Senate unequivocally condemned the students’ action in its entirety and frowned at the blocking of the Ife/Ibadan and Ife/Ede highways and other adjoining roads.
Read also: OAU Students Ordered To Vacate Hostels By Noon Saturday, School Shut
The Senate also commended the Vice-Chancellor and the entire management on the prompt and proactive decision to suspend students’ activities stressing that lives could have been lost if the actions are been delayed.
It is therefore affirmed its support for the decision taken by the management that:
Students should vacate the campus and their respective halls of residence.
The swearing-in of the newly elected students’ union officers is to be put on the hold.
“The Senate mandated the University management to set up an independent committee to look into the immediate and remote cause(s) of the students ‘ protest to prevent any future occurrence.
The committee is to submit its report within two weeks”, It states.
©iDeemlawful News
[carousel_slide id='8496']