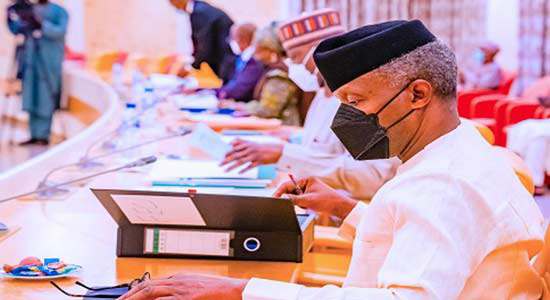 The National Economic Council (NEC) on Friday adopted a resolution, mandating States, including the Federal Capital Territory (FCT) and the Federal Government to commence payment of compensations to victims of police brutality.
The Nation reports 28 States and the FCT had, following October 2020 #EndSARS protest, set up judicial panels of inquiry to listen to protesters and investigate allegations of police brutalities, which gave rise to the violent protests that claimed lives and led to destruction of property.
However, at the end of its virtual meeting on Friday, NEC, besides giving go-ahead for the payment of compensations, also unanimously resolved to ensure the prosecution of persons indicted by the panels.
According to a statement by Senior Special Assistant to the President on Media and Publicity, Office of the Vice President, Mr Laolu Akande, NEC resolved that payment of compensation to victims should proceed with each State, in collaboration with the Federal Government, establishing the modalities for the settlement of all monetary compensations awarded by the panels.
“Each State, in collaboration with the Federal Government, shall establish modalities for the settlement of all monetary compensations awarded by the Panels. Already, as resolved by NEC, a number of States have set up Victims Compensation Funds, from which several victims have already received payments of sums awarded to them by the panels.
“Prosecution of indicated persons, including police and civilians: Council directed state governors to immediately forward copies of final reports of the panels to their Attorneys-General for prompt arraignment and prosecution of all indicted persons.
“Where incidents in the reports relate to matters of discipline, in addition to prosecution, NEC urged the Nigeria Police Force to take disciplinary action on the affected officers in line with the provisions of the Police Act 2020,” parts of the statement read.
NEC also advised organisers of #EndSARS memorial protest to shelve the plan to forestall a possible breakdown of law and order, considering the security situation across the country.
NEC also advised the organisers to explore lawful alternatives of engaging authorities, noting that such protest has the likelihood of being hijacked by other elements, who have other motives of criminal nature, which might escalate into mayhem.
It expressed its belief in the right of citizens to lawful and peaceful protest, but also reminded the organisers to recognise efforts of both federal and state governments to address issues raised through last year’s protests.
The statement read: “While appreciating the role of lawful peaceful protests in the advancement of public discourse under democratic governance, the National Economic Council (NEC) strongly advise those planning public protests across the country to mark the anniversary of the #EndSARS, to consider other lawful alternative means of engagement.
“This is because of the current security situation across the country and the possibility of such protests being hijacked by armed hoodlums and other opportunistic criminals to cause mayhem at such protest events and venues. Council, therefore, urges the organizers to reconsider their plan.
“NEC would also like to point out the various actions already taken by Federal and State Governments to address the grievances that led to the 2020 protests”, NEC noted.
The actions the statement highlighted included, “the disbandment of SARS; broad police reforms; establishment of judicial panels of inquiries to investigate allegations of human rights violations by members of the Nigeria Police Force and other security agencies; recommendations of panels which are already at various stages of implementation, including the setup of Victims Compensation Funds from which several victims have received payments of sums awarded to them by the panels; and prosecution of police personnel indicted by the panels.”
According to the statement: “These are commendable actions that ought to be taken to a logical conclusion in a peaceful atmosphere.
“Organisers of the planned protests should explore the various channels of communication with governments at various levels to advance their positions and avert the breakdown of law and order that may result from such public protests”, it said.
The NEC is presided over by Vice President Yemi Osinbajo, and has the 36 Governors and Ministers in charge of the economy as well as the Governor of the Central Bank of Nigeria (CBN) as members.
[carousel_slide id='8496']