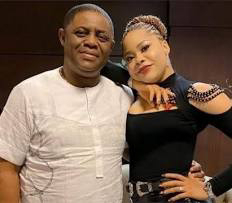 The former Minister of Aviation, Chief Femi Fani-Kayode, has told the Federal High Court in Abuja that his ex-wife, Precious Chikwendu left his house to allegedly optimize her “extra-marital affairs and inordinate sexual affection” while depriving his children of breast milk on the account of the need to preserve her shape.
Fani-Kayode also prayed the court to dismiss the N800million suit that was instituted against him by his estranged wife, Ms Precious Chikwendu. The erstwhile Minister, in a counter-affidavit he filed through his team of lawyers, told the court that his ex-wife who is a former beauty queen, deprived his children breast milk on the account of the need to preserve her shape, “coupled with a contrived medical condition which she claimed would not permit her to breastfeed them”.In a 23-paragraphed affidavit he personally deposed to in opposition to the suit, Fani-Kayode, said it was not true that the Applicant (Ms. Chikwendu) was violently separated from the four children they had together.
He told the court that rather, “she elected to leave her matrimonial home and consciously abandon the children, in order to optimize without restraints, her extra-marital and inordinate sexual escapades”.Continuing, he said: “As a fact, it is not surprising that Ms. Precious Chikwendu is capable of such reckless abandonment, because: whilst she was with me in the house afore-described, she employed 12 in-house nannies to cater for the children, excluding supervisors and nurses who equally attend to them; the Applicant did not at any time extend maternal care to the children, for the reason that she had a medical condition which deprived her of any filial bond with them; she deprived the children of the natural sucks or breast milk, also on account of the need to preserve her body shape, coupled with a contrived medical condition which she claimed would not permit her to breastfeed them”.
According to him,”Despite the enormity of the Applicant’s brazen amoral acts, several entities had been made to her, in returning home or visiting the children, but she completely rebuffed all.“In a recent letter which was written to her Solicitor handling the matrimonial case, his attention was drawn to the fact that there has been no time that the Applicant was deprived physical access to her children, in as much as she has been speaking to them on phone and doing video calls with them.
“The Applicant only plays the victim and cries foul of deprivation of access or separation from her children, when indeed, she does not deeply desire to be with them”, he added.Consequently, he urged the court to dismiss the suit for lacking in merit, as well as for constituting an abuse of judicial process.
He maintained that the affidavit the Applicant filed against him before the court contained “concocted facts, presented by subterfuge, in order to mislead the Court and frustrate the administration of justice”.“I know that the instant suit is nothing but a smokescreen intended to avoid the longs arms of justice and to malign me.“There is no merit whatsoever in this suit, which was filed in abuse of court and judicial process.It is in the interest of justice to dismiss this suit for lacking in merit.“I conscientiously depose to this counter-affidavit from facts within my personal knowledge, and in good faith, believing same to be in accordance with the Oaths Act currently in force” the embattled former Minister stated.
It will be recalled that his estranged wife had approached the court to enforce her fundamental human rights, even as she urged the court to issue a restraining order against the former Minister.Ms. Chikwendu, in the suit she filed through her team of lawyers led by Mr. Abdul-Aziz Jimoh, also cited the Inspector General of Police, the Deputy Inspector General of Police (DIG) Force CID, Commissioner of Police FCT, and the OC Legal (CID) FCT Command, CSP James Idachaba, as Respondents in the matter.She is praying the court to restrain her former husband from using the other Respondents to intimidate or harass her in any form whatsoever, pending the hearing and determination of an earlier suit marked No CV/372/2021, which she filed to take custody of four children she had for the former Minister.
Chikwendu told the court that she is apprehensive of an imminent violation of her fundamental rights in the actualization of threats to her life by the erstwhile Minister and in the face of the refusal of the 1st to the 3rd Respondents (IGP, DIG Force CID and CP FCT) to investigate her genuine petitions of threat to life against the 5th respondent (Fani-Kayode).She is among other things, seeking a declaration that an invitation letter dated March 10, 2021, which was written by the 4th Respondent (Idachaba) amounts to a rise by the 5th Respondent in cahoots with the 1st to 4th respondents, to stultify and interpose in Suit No CV/372/2021 and to orchestrate a contravention of her fundamental rights as enshrined in Part IV of the Constitution of the Federal Republic of Nigeria 1999(as amended) by imminent unlawful harassment by invitation, interrogation, molestation and detention.The suit had since been assigned to Justice Inyang Ekwo for hearing.
[carousel_slide id='8496']