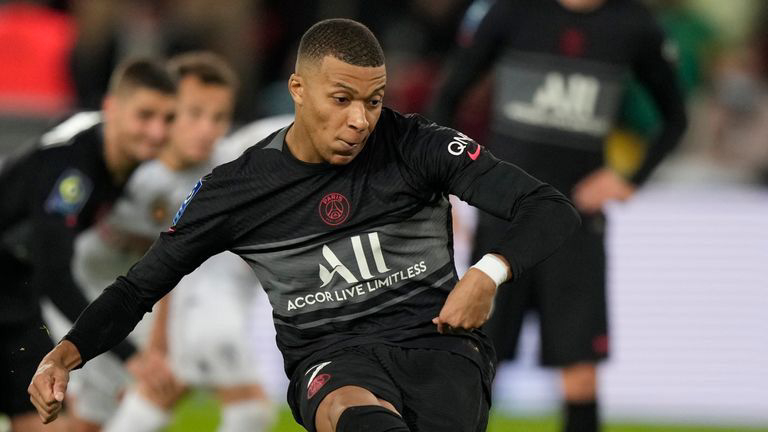 Paris Saint-Germain were without Neymar and Lionel Messi due to international duty; VAR review gave PSG the late penalty for a Pierrick Capelle handball as Kylian Mbappe converted to open up nine-point gap at Ligue 1 summit.

Kylian Mbappe ended a four-game scoreless streak for Paris Saint-Germain with a late penalty that helped the capital side extend their Ligue 1 lead to nine points with a 2-1 home win against Angers on Friday.
The France striker buried his spot kick three minutes from time after Danilo Pereira had cancelled out Angelo Fulgini’s first-half opener to put PSG on 27 points from 10 games.
Angers, who were the best side in the opening half, are fourth on 16 points as they left the Parc des Princes frustrated after a VAR review gave PSG the late penalty for a Pierrick Capelle handball.
Without their South American internationals Lionel Messi and Neymar, who played World Cup qualifiers with Argentina and Brazil respectively on Thursday, PSG struggled and looked short of ideas throughout.
Angers took the lead in the 36th minute when Fulgini flicked the ball home from point-blank range from Sofiane Boufal’s cross.
In the 63rd minute, Juan Bernat replaced Abdou Diallo for his first appearance in more than a year following a serious knee injury.
PSG lacked inspiration, failing to bring danger into the visitors’ area, but in the 69th minute, Ander Herrera found Mbappe on the right flank and the France striker sent a fine cross for Pereira, who headed home to equalise.
Mauricio Pochettino’s side pushed and were rewarded in the 87th minute when Capelle appeared to handle Mauro Icardi’s header and Mbappe kept his cool to convert the resulting spot-kick for his fifth league goal of the season.
Angers defender Romain Thomas was fuming at the VAR, saying Icardi had previously fouled him.
“I’m sick and tired of the VAR. Millions were invested in it and they don’t know how to use it. I was fouled by Icardi and he took advantage of his foul to be in front of goal,” he said.
Supersport
_Ismail Olaminiyi Reports_
[carousel_slide id='8496']