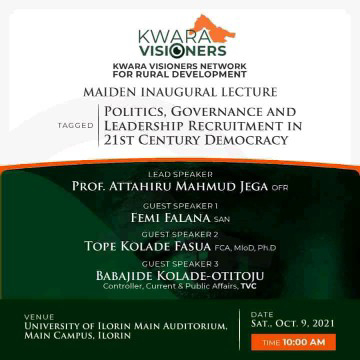 Kwara Visioners are new hands that harvested to expand the baseline, for the generations of sterling ideas, to progress politically and economically for the benefits of all Kwarans.

The Maiden inaugural Lecture take place at the University of Ilorin, Auditorium. While the programme was themed POLITICAL, GOVERNANCE AND LEADERSHIP RECRUITMENT IN 21ST CENTURY DEMOCRACY.

According to what is gathered by iDeemlawful News, at the programme, Eminence Man, Prof. Attahiru Mahmud Jega who happens to be the former INEC Chairman , also a former deputy Vice Chancellor and Vice Chancellor at Bayero University, Kano. He presented as the Lead Speaker which the topic titled “A review of the Nigerian Situation”

Quoting from his statement, “The preponderance of political regimes in the 21st Century are democratic, and of the variety called representative or liberal democracies. The Economic Intelligence Unit’s Democracy Index 2020, has identified 110 countries with democratic regimes, classified as “Full Democracies” (23), “Flawed Democracies” (52) and “Hybrid regimes” (35)(EIU, 2020). Nigeria is among the 35 Hybrid regimes globally, 13 of which are in Sub-Saharan Africa”.

” He also mentioned four Basic Tenets and principles of Representative, Liberal, Democracy which are as follows:-

1.“A political system for choosing and replacing the government through free and fair elections

2.The active participation of people, as citizens in politics and civic life

3.Protection of human rights of all citizens.

4.A rule of law in which the laws and procedures apply equally to all citizens.” and lots of his speech was presented .

“The vision of the great organization is to Create a platform for Brilliant mind to met them express their political aspirations, through a robust strategic ideas for the realization of their goals. While the mission is to Reach out the progressives at home and in the diaspora pool together sterling ideas, get their support to deliver good governance, now and in the future in kwara State.”