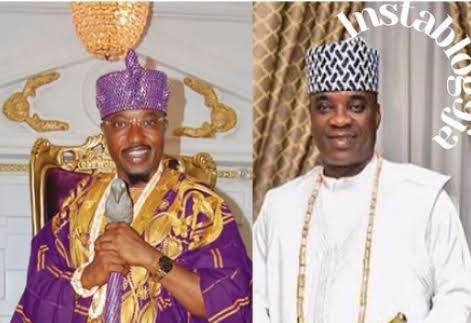 By Ayobami Agboola, Osogbo
The Otunba of Iwoland,Chief Sikiru Wahab Atanda, has condemned the popular Fuji musician, Wasiu Ayinde popularly called KI for his open disrespect to Oluwo of Iwoland, HIM Oba Abdulrosheed Adewale Akanbi, in Offa, Kwara State over the weekend.
Otunba Sikiru described Wasiu Ayinde as an arrogant musician with no manner and respect for elders and traditional institution.
He affirmed the throne of Oluwo as one of the very few ten to eight natural paramount traditional Rulers in the whole of Yorubaland. As such, the throne must be accorded respect by all people, in all circumstances.
He disclosed the action of the Fuji musician is condemnable in the circulated video, saying his lack of manner endeared him to intrude a private discussion among the three monarchs.
He said the vehicle was static for a private discussion and not that Oluwo just sat in the front of a moving vehicle before the musician intruded.
He questioned the quality of his title as Mayegun, saying no one properly schooled in Yoruba culture, tradition and moral will relate with monarchs like Wasiu Ayinde.
He said Wasiu Ayinde deserve no traditional honour as he called for withdrawal of his traditional title.
He castigate KI for his usual unmannered behavior, challenge him to revisit school where moral is taught. He said his various encounters with KI towards traditional institution and people above his age are not palatable, noting no one toe that way and end well.
Otunba Sikiru tasked all cultured Yoruba sons and daughters to openly demand removal of any chiefs who disrespect any Yoruba henceforth.
He enjoined Wasiu Ayinde to change his way , tender public apology and avoid Oluwo henceforth.
“I condemned the action of Wasiu Ayinde in strong term. He is a musician without manner, and a naturally arrogant human. His open disrespect to Oluwo and Elegushi is condemnable and an affront on traditional institution”
“His likes do not worth to be honour with traditional title. He intruded a private discussion going on among three kings in a static vehicle and started calling them by their names. Is that the attribute of a Mayegun or who?”
“I want to sound this warning of note, Wasiu Ayinde should be mindful of how he relates with Oluwo henceforth. Oluwo is one of the few 8 to 10 natural paramount ruler in Yorubaland who have never been upgraded from Baale to Oba but has and wears his crown from inception. He deserves respect from every reasonable, cultured and morally upright sons and daughters of Yoruba land and beyond. Irrespective of who you be, Oluwo must be regarded”
“On behalf of the good people of Iwoland and in respect of Yoruba culture and tradition, I request for an open apology and a promise note that such will never happen again or else, he should avoid Oluwo”
“I equally enjoin the Wasiu Ayinde to revisit moral school where public conducts are learnt for nurturing”
[carousel_slide id='8496']