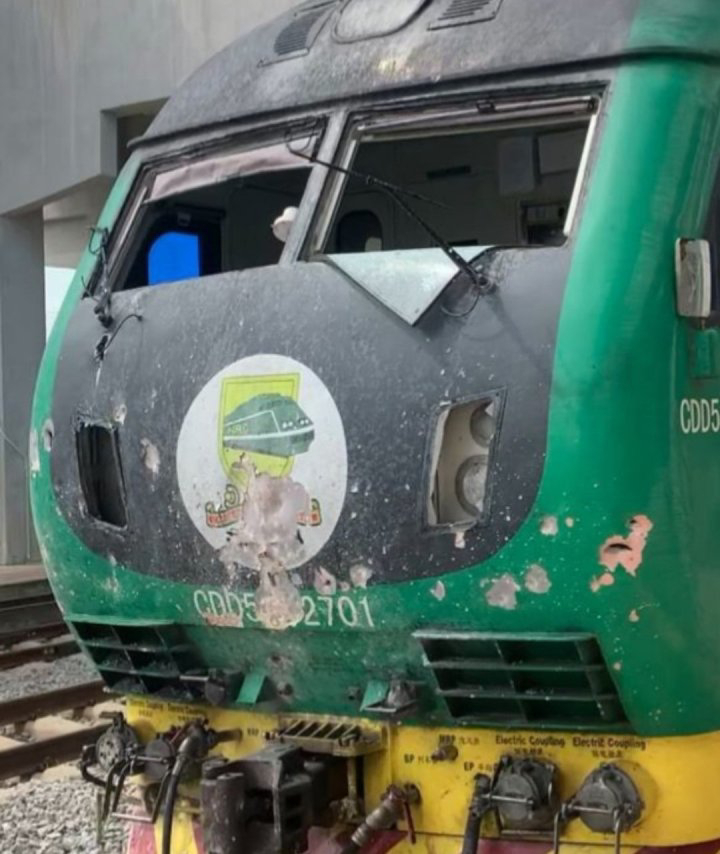 Nigerian authorities had knowledge of the latest attack on the Abuja-Kaduna rail line, intelligence shows.

The train was bombed on Wednesday and Thursday with the intention of abducting passengers.
The incursion was carried out by Boko Haram and bandits, a joint operation that confirmed their collaboration in the North-West.
Eons Intelligence reports the sighting of classified messages between a notorious bandit, Baffa, and his ally, Bala.
On October 19, 2021, a document titled “PLANNED ATTACK ON TRAIN AROUND RIJANA, KADUNA STATE” was sent to relevant government agencies.
It stated how the mission was planned and executed by the Darussalam, an Arabic code word for Boko Haram.
Baffa, whose communication was intercepted, told Bala that Darussalam and bandits led by “Danlami and Lawan” were going to plant a bomb on the railway.
Baffa said he decided not to participate in the operation because “it is risky” but believed the duo will strike successfully.
After Wednesday’s hit, the terrorists went back the next morning to bury an Improvised Explosive Device (IED).
The bomb exploded but the train was able to reach the terminus at Rigasa, moving another 7 kilometers.
The plan to hijack it, seize civilians and move them to the forest is the modus operandi of outlaws controlling territories in North-West states.
The Nigeria Railway Corporation (NRC) blamed “hoodlums” for the attack. The Managing Director, Fidet Okhiria, called it an act of vandalism.
On Friday, Police Public Relations Officer in Kaduna, Mohammed Jalige told DAILY POST that he could not comment, explaining that the railway is not under the preview of the command.
Nigerian Railway Command’s CP Oyediran Oyeyemi said only the Force Headquarters could speak.
Operations on the Abuja-Kaduna route have been suspended, bringing to reality the fear that activities of non-state armed actors may shut down train services.
In July, security agencies were informed that bandits were attending training conducted by Boko Haram and the Islamic State’s West Africa Province (ISWAP).
Several bandits travelled from Zamfara State to attend drills in terrorist hideouts in Borno State, the Nigeria Immigration Service (NIS) revealed.
A memo titled “Movement of Armed Bandits from Zamfara to Borno for Intensive Boko Haram Training” was signed by ACG Usman Auna.
The intel, conveyed with Ref. No. NIS/HQ/CGI/943, directed immigration comptrollers to intensify surveillance.
[carousel_slide id='8496']