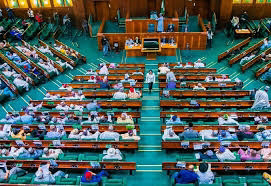 The House of Representatives, on Thursday, threatened that it will ask the Central Bank of Nigeria to take over the ownership of Heritage Bank of Nigeria for owing the Federal Government more money than its entire share capital.

The threat was made by its ad hoc committee on the assessment and status of all recovered loots (movable and Immovable assets) from 2002 to 2020 by agencies of the Federal Government for effective efficient management and utilisation.
The committee also threatened to issue an arrest warrant on the Managing Director of Polaris Bank for failing to appear before it to explain why the bank had not remitted over $32m owed to the Nigerian National Petroleum Corporation.
The Chairman of the committee, Adejoro Adeogun, issued the threats at an investigative hearing in Abuja.
Adeogun said, “If Heritage Bank is owing Nigeria more than its share capital, we will not hesitate to ask the National Assembly to write to CBN to take over Heritage Bank.
“They cannot be owing more than their share capital, sit on it and feel too big to respond to invitations from the National Assembly. Clark, you have to write them, giving them till Wednesday next week. That is the last time we are going to give them.”
The committee, however, turned back all representatives of the banks as well as the Accountant General of the Federation, saying they lacked the capacity to answer the questions from the committee, giving them till Wednesday next week to appear.
Adeogun also condemned the attitude of the management of Polaris Bank for not honouring an out-of-court settlement with the NNPC and failing to pay up its debt to the government.
Responding to a claim by the legal officer who represented the bank, but failed to identify himself, that the bank had tendered evidence of the payment, Adeogun said, “You did not tender any evidence. You wrote a letter saying you directed CBN. Directing CBN does not mean CBN has paid the money. You directed CBN to use your reserve and if they make that payment, your reserve will fall below regulatory requirement. So, CBN has ignored your advice and they have not paid.
“That money is supposed to be paid into the federation account to fund the 2022 budget. So, you have between now and Wednesday next to appear here with evidence of your payment, not instruction to CBN because that is not acceptable. We have to make sure that you pay that $32m to Nigerians.”
The Chief Financial Officer, NNPC, Umar Ajiya, said at the hearing that the NNPC was yet to receive the payment from the CBN, saying “Polaris Bank is still owing us $32m.”
[carousel_slide id='8496']