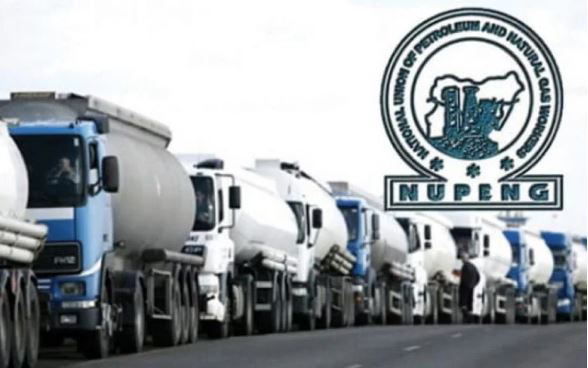 On Saturday, the National Union of Petroleum and Natural Gas Workers, NUPENG, announced that its Petroleum Tanker Drivers (PTD) will commence strike on Monday.
The union gave ‘deplorable state of the nation’s highways and other issues as the reason for the strike
Mr Tayo Aboyeji, South-West Zonal Chairman of NUPENG, who confirmed this to the News Agency of Nigeria (NAN) said the union has lost many lives and property due to bad roads.
According to him, all tanker drivers from the union would withdraw their services nationwide.
He noted that they had in the past called off their strike because it affected, majority of Nigerians but now their hands are tied.
“We are going on a nationwide strike because of the deplorable and shameful state of our highways.
“When a truck loads petrol in Lagos, the drivers spends five to six days to get to Abuja because of the shameful state of the roads.
Aboyeji further explained that calls by the executive of the union have fallen on the deaf ears of the government as the highways continue to deteriorate nationwide.
He lamented that tanker drivers have been going through harrowing situation while rendering selfless national service and the rate of fire incidences involving petroleum tankers has increased.
This, he said, was because of government’s failure to enforce installation of safety gadget on tankers in the country.
“This will protect the inflammation contents of their trucks from spilling over in a situation of road accident.
“We see the failure of the government in this regards as the height of insensitivity to lives of innocent Nigerians and union cannot continue to fold its hands while our members are getting burnt everywhere and everyday,” he added.
[carousel_slide id='8496']