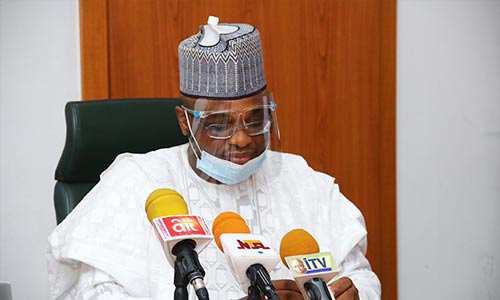 The Federal Government has said telecommunications and digital economy sector would remain central to the future growth and prosperity of the country.

The Minister of Communications and Digital Economy, Prof. Isa Pantami who disclosed this, said the sector generated over N1 trillion to the Government coffers between 2019 and 2021.
Pantami spoke at a media briefing to mark the 2021 Digital Nigeria Day, insisting that the sector played a major role in moving Nigeria out of recession.
Pantami was represented at the virtual briefing by the Permanent Secretary, Federal Ministry of Communication and Digital Economy, Mr. Bitrus Bako Nabasu.
He said Nigeria had to join the world in celebrating the day due to giant strides recorded in its digitalization efforts.
Pantami alluded to the ICT sector recording the highest growth rate in the fourth quarter of 2020 (14.70 per cent), as reported by the National Bureau of Statistics (NBS), asserting that the telecommunications sub-sector grew at 15.90 per cent as the highest growth rate over the past decade.
The Minister said: “Additionally, the ministry and its parastatals have generated over N1trillion for the Federal Government in less than 2 years. This translates to an average of about N44 billion every month or over N1.4 billion every day.
“About N360 billion of this revenue was largely from Spectrum, allocated by the National Frequency Management Council (NFMC). Another, over N600 billion was paid by ICT companies to the account of the Federal Government through the Federal Inland Revenue Service (FIRS).
“In addition to those already established, we have over 455 other projects and programmes that are ongoing. All these are in full alignment with the National Digital Economy Policy and Strategy for a Digital Nigeria.”
“We have developed 16 national policies: 15 of them focus on specific pillars in the general National Digital Economy Policy for a Digital Nigeria.”
“We have significantly increased the number of National Identification Number (NIN) enrolments since the National Identity Management Commission (NIMC) joined the Communications and Digital Economy family in September 2020. From the inception of the NIN enrolment process to September 2020, there were 42 million unique NIN enrolments. Through our supervision, this number rose to 61,092,044 NIN enrolments as at August 11, 2021.”
[carousel_slide id='8496']