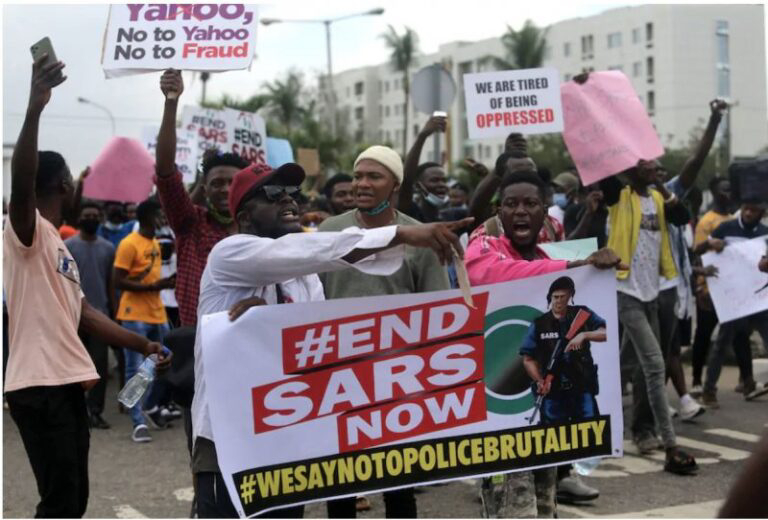 Activists under the aegis of TakeItBack Movement in Lagos State have faulted the Lagos State Commissioner of Police for directing that no protest should hold in the state in commemoration of the one year anniversary of #EndSARS.
In a statement titled, ‘EndSARS anniversary: Lagos CP statement, an invitation to anarchy’, the activists insisted that they would go on with their protest.
In the statement signed by the activists’ Legal Adviser, Festus Ogun, they claimed protest is a constitutional right.
The statement read, “The statement credited to the Lagos State Commissioner of Police, Hakeem Odumosu, warning citizens not to exercise their fundamental rights to protest during the commemoration of the #EndSars Massacre Anniversary is unconscionable, draconian and a reckless invitation to anarchy. Concerned Nigerians have taken his words like those of stand-up comedians.
“CP Hakeem Odumosu has no such power, right or authority to warn against, prohibit or outlaw protests. That will be acting the fragile limits of his powers and against the constitution. He cannot, under our extant laws, interfere with the hallowed right to protest under any guise. The only legal duty he has is to ensure the security and welfare of all protesters; which must be professionally done.
“#EndSars Memorial Demonstration is a constitutionally guaranteed right. Sections 39, 40 and 41 of the 1999 Constitution of the Federal Republic of Nigeria, as altered, safeguard and guarantee the right to protest as a human right that shall be enjoyed by all citizens without arbitrary restraint or careless warning. Articles 6, 9, 10, 11 and 12 of the African Charter on Human and Peoples Right (Enforcement and Ratification) Act equally protect the right to protest. Additionally, Articles 18-21 of the Universal Declaration of Human Rights, 1948 fully protect the constitutional liberty to protest.
“Emphasising the sacred nature of the right to protest in a constitutional democracy, the Court of Appeal in the case of IGP V. ANPP (2008) 12 WRN 65 held that “certainly in a democracy, it is the right of citizens to conduct peaceful processions, rallies or demonstrations without seeking and obtaining permission from anybody. It is a right guaranteed by the 1999 Constitution and any law that attempts to curtail such right is null and void and of no effect whatsoever”.
“Rather than becoming restless about the looming inevitable revolution that will be witnessed in our country, in the fullness of time, the police chief is advised to ensure the right of protesters are fully protected.
“A police notorious for extrajudicial killing, torture, extortion and brutality lacks the legal and moral right to warn or caution victims on how to demand a better life. The audacity is provocative, scandalous and insulting.
We shall not condone any form of harassment, intimidation, brutalization or arrest. We shall resist any attempt to encroach on our constitutionally guaranteed rights. The police and other security agencies are hereby put on notice and they should be guided accordingly.”
[carousel_slide id='8496']