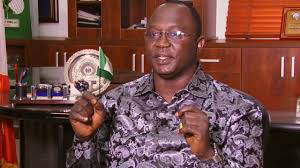 President, Nigeria Labour Congress (NLC), Comrade Ayuba Wabba has warned the political leaders, especially the Northern and the Southern governors, not to take action or make statements that will divide the country.
Wabba said the statement by the governors on power shift could cause disunity.
It would recalled that a few weeks ago, the Southern Governors Forum met in Lagos and demanded that power must go to the South in 2023. Also, last Monday, the Northern Governors Forum at their meeting in Kaduna made a counter demand that power must remain in the North.
Speaking during the NLC roundtable on social protection cover for workers in Abuja, Wabba said it was sad that the politicians found the time to discuss the elections of 2023 when 2021 presents a foreboding cloud of insecurity, social tensions and despondency in our empty kitchens, unsafe streets and overflowing IDP camps.
“We warn that such statements show utter disregard for the cruel predicament and sufferings of ordinary Nigerians and workers struggling with the pains of broken politics and governance dysfunction in our country.
“The 2023 elections must not be used as an excuse to unleash fresh dimensions of intractable and internecine security crises in Nigeria.
He said it was clear that the leaders were after their selfish interest rather than that of the country.
He added that unless this was quickly addressed, there would be danger.
“It is so unfortunate that the people that are expected to unite us are the ones trying to divide us. It is also very unfortunate that they are already discussing 2023 elections when the challenges on ground are still enomous.
“We warn that these careless statement, action by these leaders can disintegrates Nigeria. 2023 must not be use as an excuse to gain the confidence of their followers. There are so many challenges to be address.
“The ways thing are going, if they don’t retrace their steps and look at the interest of our country, I see danger ahead. From all intends and purposes, everybody is looking for his own interests.
“The shedding of innocent blood on daily will call for vengeance. This is something that should be of concern to our leaders. This is something that should prick their hearts. They should think of the next generation, ” Wabba said.
Speaking at the meeting, the Speaker of the House of Representatives, Hon. Femi Gbajabiamila said any politician that does not have the interest of the workers at heart was on the wrong side.
He said social protection is one of the key responsibilities of the government, adding that this has a connection with food, security, living wage employment, welfare of the citizens.
“Social protection will ensure that life becomes more meaningful to the citizens.
“These are challenging time for our country. We have a choice to make. We have it in our hand to rebuild the economy and that is what we are going to do.’’
The Chairman of the occasion, Chairman Senate Committee on Public Service, Senator Ibrahim Shekarau, who was represented by Senator Smart Adeyemi, said one of the hallmarks of true democracy is a structure that guarantees the well-being of the workers.
He said without the labour force, the nation does not exist, adding that workers deserve more than they are getting now.
” There is no doubt that the Nigerian workers deserve more than what they are getting. Everybody is feeling the pains. The National Assembly will be looking forward to the resolution and the outcome of this meeting.
“We are ready to take it up because this is why we are elected, ” Adeyemi added.
[carousel_slide id='8496']