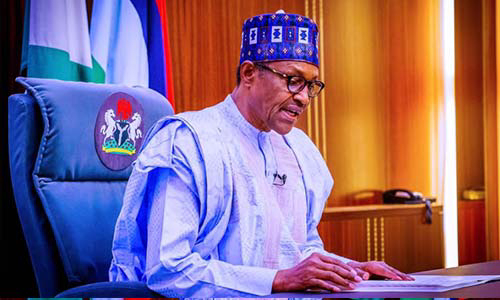 President Muhammadu Buhari has approved conditional lifting of ban on microblogging giant Twitter.
The president made this position known during a broadcast to mark Nigeria’s 61st Independence Anniversary on Friday in Abuja.
The Federal Government suspended the operations of Twitter in Nigeria on June 5, to allow the government put measures in place to address identified negative trends exhibited by the social media platform.
Buhari announced that the Presidential Committee he constituted, along with its Technical Team, to engage Twitter to explore the possibility of resolving the issue that led to the suspension of Twitter’s activities in Nigeria had successfully addressed a number of key issues.
“Following the suspension of Twitter operations, Twitter Inc. reached out to the Federal Government of Nigeria to resolve the impasse. Subsequently, I constituted a Presidential Committee to engage Twitter to explore the possibility of resolving the issue.
“The Committee, along with its Technical Team, has engaged with Twitter and have addressed a number of key issues. These are: National Security and Cohesion; Registration, Physical presence and Representation; Fair Taxation; Dispute Resolution; and Local Content.
“Following the extensive engagements, the issues are being addressed and I have directed that the suspension be lifted but only if the conditions are met to allow our citizens continue the use of the platform for business and positive engagements.’’
The president stated that government was committed to ensuring that digital companies use their platform to enhance the lives of citizens, respect Nigeria’s sovereignty, cultural values and promote online safety.
On the social welfare programmes of the federal government, the president reiterated the commitment of the government of achieving its goal of lifting 100 million Nigerians out of poverty in 10 years.
“Considering the positive impact of our Social Investment Programmes, I recently approved an increase in the number of N-Power programme beneficiaries from 500,000 to 1,000,000.
“Out of this, 510,000 have started the programme while the competitive selection process for onboarding the outstanding 490,000 beneficiaries is in progress.
“The National Home-Grown School Feeding Programme is currently being implemented in 35 States of the Federation and the FCT. Over 103,000 women have been engaged and empowered as cooks under the programme, while about 10 million pupils are being fed across public primary schools in the country.
“To grant increased access to credit to the most poor and vulnerable, I have directed an increase in the disbursement of Government Enterprise and Empowerment Programme loans to an additional one million beneficiaries laying more emphasis on the smallholding farmers through the farmers Moni programme,’’ he added.
Buhari also pledged to address the widespread discontent and disillusion about the efficiency and probity of nation’s civil service
He noted that for far too long the nation had neglected the centrality of the civil service as the engine of governance and this had manifested in ineffective service delivery.
“It is for this reason that we are refocusing the Nigerian Civil Service to provide World class service to run our country,’’ he said.
The president also promised to bring more youths into governance to address youth restiveness across the country.
He said the government would also continue to encourage girl-child education, female scholarship schemes, life skills and digital literacy skills to boost girl’s enrolment, retention and completion of schooling.
“The youths of this great country remain propellants for our today and provide guarantees that we would have a secure tomorrow.
“It is for this reason that I remain focused on expanding opportunities for their participation in politics and governance.
“Recent appointments of young people into positions of authority and their track record so far, gives me confidence that we need to bring more of them into governance and this I promise to do.
“More specifically, to encourage girl-child education, female scholarship schemes, life skills and digital literacy skills to boost girl’s enrolment, retention and completion of schooling, are all initiatives put in place to ensure gender balance in appropriately positioning our youths for positions of leadership,’’ he added.
The president also expressed the commitment of his administration to the well-being of people living with disabilities.
“Government recognises their contributions to development and I have, in this regard, directed that all relevant Government Agencies pay special attention to the peculiarities of different abilities in the implementation of policies and programmes.
On rape and gender based violence, Buhari said he would engage heads of Courts to establish specialised courts for the speedy and seamless trial of Rape/Gender-Based offences especially to ensure that justice is done for child victims of sexual violence.
“On the other hand, work has advanced in the reformation, reintegration and reunification of minors involved in one crime or the other.
“The reformation in our Correctional Services has manifested in an increase in modernised custodial centres and a transformation from strictly punitive to attitudinal changes so that criminals do not relapse into their previous lifestyle,’’ he further reassured.
[carousel_slide id='8496']