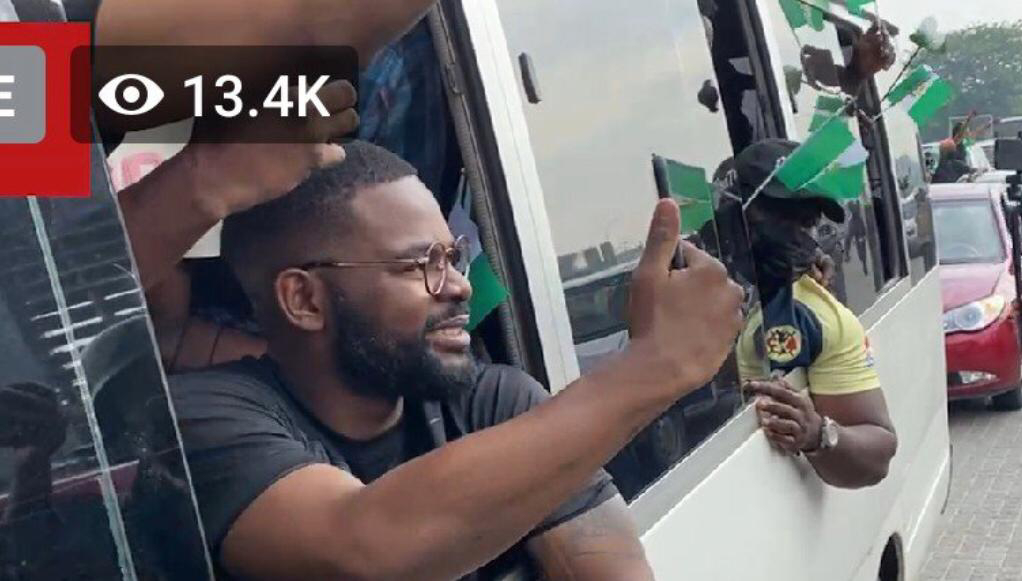 Rapper and actor, Folarin Falana, popularly known as Falz The Bhad Guy, and Comedian Debo Adebayo, popularly known as Mr Macaroni, have joined the car procession at the #EndSARSMemorial protest at Lekki tollgate in Lagos.
This is despite a ban on protests in Lagos and the heavy presence of armed police personnel at the tollgate.
The celebrities and other activities who turned up at the tollgate with their cars were seen waving Nigerian flags from inside the vehicles and honking the horns while singing solidarity songs.
Some of the activists who spoke to newsmen stated that they will continue going to and fro the tollgate as their own way of protesting against the alleged killing of protesters at the tollgate on October 20, 2020.
The tollgate was the epicentre of the protests against police brutality and bad governance last year October.
Youths who gathered day and night at the tollgate were dispersed from the location by gun-wielding soldiers on October 20, 2020, an action which some quarters believe led to the loss of lives.
This was followed by the destruction of private and public properties by hoodlums in Lagos, an incident that informed the ban on protests issued by the police in the state.
Ismail Olaminiyi reports
[carousel_slide id='8496']

N500,000 Donation From An #Obidient Met Mixed Reactions on Twitter