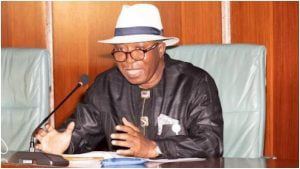 President Muhammadu Buhari has renewed the appointment of Milland Dikio as Interim Administrator of the Presidential Amnesty Programme for another one-year tenure.
The retired Nigerian Army Colonel was first appointed PAP chief in August 2020.
A statement by presidential spokesman, Femi Adesina said despite the challenges, Dikio has been able to “command widespread respect” among Niger Delta stakeholders.
It was gathered that the presidency was impressed with Dikio’s as well as a “positive security report” on him.
Powerful forces had attempted to get the administrator sacked through hawks close to the Presidential Villa and media attacks.
In August, National Security Adviser, retired Maj.-Gen. Babagana Monguno denied he was in a face-off with Dikio.
Monguno accused unscrupulous elements of stoking confusion, assuring that the Amnesty head has his “full support and confidence”.
In September, former militant commanders accused certain persons of sponsoring protests of petitions against Dikio.
Under the auspices of the Leadership, Peace and Cultural Development Initiative (LPCDI), they demanded that Dikio be allowed to actualise his plans.
LPCDI, which comprises 95 per cent of first phase leaders, said there was a clandestine plot to work against the collective interests of the South-South region and ex-agitators.
The President, Reuben Wilson, in a statement, said the programme has witnessed too many leadership.
“This has led to the sudden truncation of the plans and projects of the past coordinators and slowed down the pace of implementation of the programme’s mandate.
“The changes led to each coordinator starting afresh with new plans and projects, abandoning those of predecessors. This has greatly hindered PAP’s stability and management”, Wilson complained.
[carousel_slide id='8496']