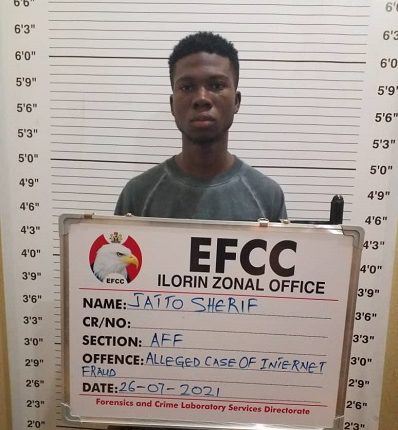 A federal high court in Ilorin has convicted one Jatto Sheriff Umar, 21, who claimed to be the founder of Facebook, Mark Zuckerberg, in order to defraud unsuspecting victims via online relationship over offences bordering on personation and cybercrime.

In a statement by the Head, Media and Publicity of the Economic and Financial Crimes Commission (EFCC), Wilson Uwujaren, he said the Ilorin Zonal Command of the antigraft agency also secured the conviction of four other persons over similar Offences.
“They are a fake US Military Officer, Oguntoyinbo Oluwatobi Damilola; Taiwo Akinyemi Kayode from Ekiti West Local Government Area of Ekiti State, Adebayo Adeola Mark from Osi in Ekiti Local Government Area of Kwara State, Adedoyin Olayinka from Ilesha West Local Government Area of Osun State and one Yusuf Alameen Abiodun from Igbo-Owu Area of Kwara State.
While the quartet of Jatto, 21, Damilola, Taiwo and Mark were prosecuted before Justice Mahmud Abdulgafar, Justice Adenike Akinpelu, both of the Kwara State High Court sitting in Ilorin, heard the case of Olayinka and Abiodun.
Read also: Police To Deploy 34,587 Personnel, Three Helicopters, For Nov 6 Anambra Election — IGP
The defendants pleaded guilty to their separate charges.Innocent Mbachie represented the EFCC in the cases before Justice Abdulgafar, while R. E Alao was prosecuted for the Commission in the cases before Justice Akinpelu.
The two counsels urged the courts to take notice of the confessional statements and the guilty plea entered by the defendants as well as the evidence tendered against them, which included the devices used in perpetrating the crime to convict and sentence the defendants as charged.
Read also: Oyo Govt Set To Revoke Contracts, Drags 22 Firms To EFCC
Justice Abdulgafar sentenced Jatto (Zuckerberg’s impostor) to six months imprisonment each on counts one and two, to run concurrently at Mandala Correctional Centre. The sentences are suspended, but the convict would be reporting to an official of the Correctional Centre.
The court also ordered the forfeiture of his iPhone 12 pro, laptop and manager’s cheque, which he raised as restitution to his victims.The judge gave Damilola a suspended sentence of six months imprisonment on counts one and two, to run concurrently while ordering the forfeiture of the phone used to perpetrate the crime to the federal government.
Justice Abdulgafar also sentenced Taiwo to a suspended term of six months imprisonment. The court ordered that the convict’s Black Toyota Corolla Car with registration number LRN237RA, Dell Laptop, and one iPhone 11 pro be forfeited to the federal government.A similar sentence was imposed on Mark as the court sentenced him to a term of six months imprisonment, which shall be suspended while ordering the forfeiture of the phone used in committing the crime.
On the other hand, Justice Akinpelu sentenced Olayinka to six months imprisonment each on counts one and two, to run concurrently with the option of a fine of N200,000 on each count.In the same vein, the judge sentenced Abiodun to six months imprisonment with an option of a fine of N200,000.
The court also ordered the forfeiture of a draft of N135,000 raised as restitution to the victim of the crime as well as iPhone XR used as an instrumentality of the crime.
[carousel_slide id='8496']