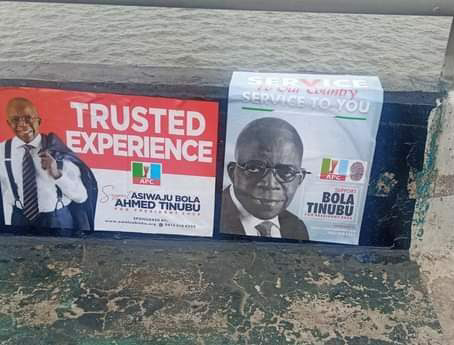 Posters of the National leader of the All Progressives Congress (APC), Asiwaju Bola Tinubu have flooded Lagos ahead the 2023 presidential election.
Though Tinubu has not officially declared his intention to contest the 2023 presidency, his body language and those of his supporters tilted toward the presidency.
Tinubu’s posters for the poll were seen in many strategic areas of the state, such as Ojota, Maryland, Ketu Ikeja, Lagos Island, Ikorodu, Ikotun, Igando, Ojuelegba among others.
One of the posters read: “Together we move Nigeria forward, Asiwaju Bola Tinubu, President 2023.”
The South West Agenda for Asiwaju (SWAGA) is the movement championing the presidential ambition of Tinubu for 2023.
SWAGA is billed for launch in Lagos this week. The launch is expected to fully draw the roadmap for the former governor of Lagos’ 2023 ambition.
SWAGA, which is being led by a former minister of works and media adviser to the late Chief Moshood Abiola, Prince Dayo Adeyeye, had already inaugurated chapters in Osun, Ogun, Ondo and Ekiti States after its regional inauguration in Ibadan, the political headquarters of Western Nigeria, on December 15, 2020.
The group began a week long sensitization, consultation and mobilisation tour in Lagos with visits to traditional rulers in Badagry, Ikeja, and Lagos Divisions solicited for their support.
At the meeting, Adeyeye said, the group had been strengthened to forge ahead in its consultations because of the positive responses by millions of Nigerians.
He urged the traditional rulers in the areas visited to prevail on Tinubu, to run for 2023 presidential election.
According to the national chairman of SWAGA 23, Tinubu is preferred for the highest service, having demonstrated that capacity as former governor of Lagos state..
Prominent among the traditional rulers that Tinubu to contest for president were Onigando of Igando, Oba Lasisi Gbadamosi, Ojora of Ijora Land, Fatai Ojora, Oniru of Iruland, Oba Gbolahan Lawal, Elegushi of Ikateland and others.
[carousel_slide id='8496']