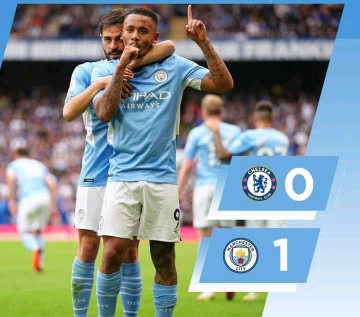 Chesea unbeaten start to the premier league was brought to an end as Manchester City moved level on points with the Blues thanks to a 1-0 win at Stamford Bridge.

On his match-winning strike, Jesus said that “I never think I can turn properly, because sometimes it’s difficult to play back, but I turned and I can shoot.
“Yes, it’s a bit lucky, but yeah I’m very happy to score that goal. The most important thing is everyone played good and we won the game.”
Gabriel Jesus’ second-half strike gave Pepe Guardiola’s men a deserved victory as they gained small revenge for last season’s Champions League final defeat to Thomas Tuchel’s men by the same scoreline.
Chelsea head coach Thomas Tuchel said that “We were never on our highest level. You cannot expect to get a result. It could turn things around maybe with one header. We can accept it was not our best game.”
He also stated that “I did not feel the belief, 100% that we believed in it. It was doubtful and we were protecting something, it felt like we had something to lose. There was a lot more to win than to lose. Can happen. We lacked energy.”