Home News Sexagenarian, One Other Sent to Prison Over Theft Of 4-month-old Baby In...
Facebook
Twitter
WhatsApp
Telegram 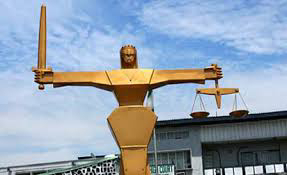 A 66-year-old woman, Adebisi Balogun, has been ordered to be remanded in prison by an Osun State Magistrate Court, for allegedly stealing a four-month-old baby.
She was arraigned with one Awoniyi Adegboye, 60, for conspiring to commit the act.
Police prosecutor, Inspector Adeoye Kayode had told the court that the defendants, sometimes in April 2021 conspired to commit the offence.
He added that Adebisi behaved in a manner likely to cause a breach of public peace on August 26, 2021, at Ayetoro Area having been caught with a four-month-old child.
According to the prosecutor, the offences were contrary to sections 516, 317(1)(7) and 249 (D) of Criminal Code CAP 34 Vol. Il Laws of Osun State of Nigeria 2002.
Adebisi and Adegboye pleaded not guilty to charges of conspiracy, but Adebisi pleaded guilty to charges of child stealing and conduct likely to cause a breach of public peace.
Counsel to the defendants, Barrister Okobe Najite and M. Akinwande urged the court to admit the defendants to bail in most liberal terms, saying they would not jump the court process if given bail.
However, Inspector Adeoye opposed the application on the ground that the defendants are liable to jump bail, saying the child recovered from them is at the orphanage.
Ruling on the application, presiding Magistrate, Mrs O. Adaramola denied the application and ordered the remand of the defendants in Ilesa correctional facility.
She adjourned the matter till September 21 and 21, 2021 for an accelerated hearing
[carousel_slide id='8496']