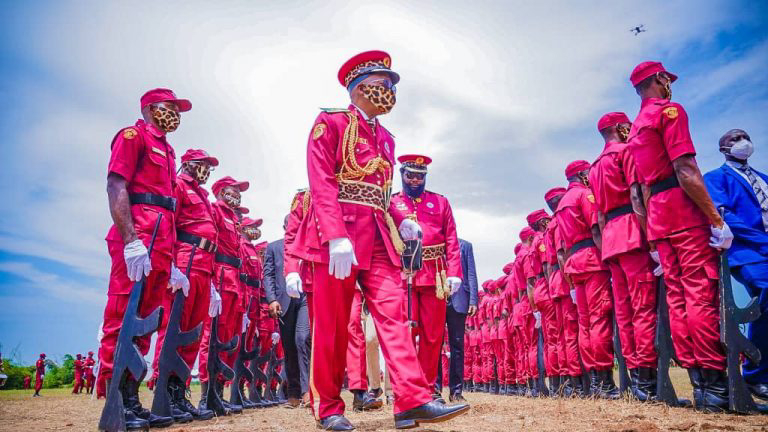 — Recruits 750 Vigilantes For Local Intelligence Gathering
Osun State Governor, Adegboyega Oyetola on Tuesday, inaugurated 360 newly-recruited officers into the State Security Network Agency ”Amotekun Corps’.
This follows the completion of the 23-day intensive training programme the personnel underwent as part of efforts to make them professionally savvy and prepare them for the task ahead.
Speaking at the Passing-Out-Parade ceremony for the new Amotekun Corps officers which held in Ejigbo, Governor Oyetola stated that his administration’s commitment to security, safety and welfare of the people remained irrevocable.
He added that the Adminstration had given security the prime position, as it is critical to its Development Agenda and a strategy for revolutionising the State’s economy. 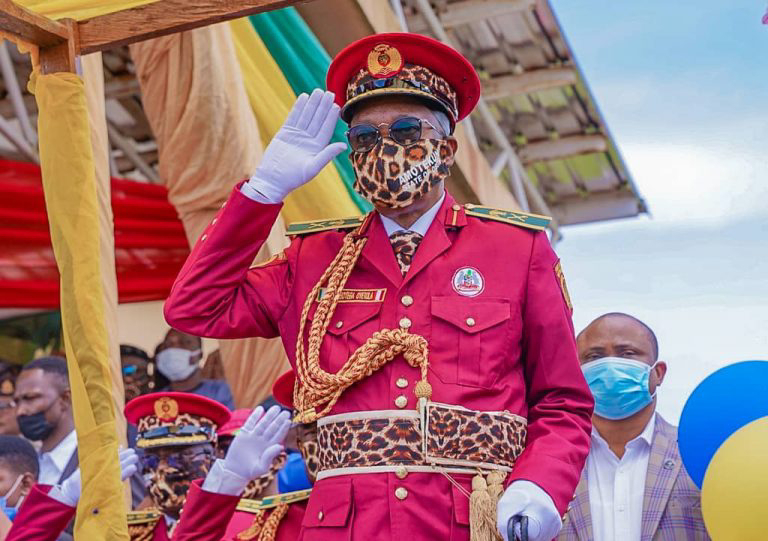 The Governor charged the new Amotekun Corps personnel to display the highest level of professionalism, discipline, competence, integrity and Omoluabi ethos in the discharge of their duty to protect the people and the State.
He also implored citizens and residents of the state to cooperate with the Corps operatives to make security management easy and peaceful. “All Osun citizens must own the Corps and provide them with information that will help them to effectively protect us,” he added.
Speaking further, Oyetola said: “Amotekun is created to collaborate with the security agencies and the vigilance groups and hunters across the State in order to ensure security in a peaceful, harmonious and professional manner.
“Let me also remind you all that by the nature of Amotekun operations and network, yours is a complementary and collaborative security outfit. I therefore urge you to collaborate with your colleagues in neighbouring South West States to keep our region and our people safe.
“Security is critical to our Development Agenda and a strategy for revolutionising the economy of the State. Consequently, you have a crucial role to play in attaining this noble objective. You must therefore secure the State with integrity, civility and a high sense of responsibility.
“Our State is noted as a peaceful one. We all have a responsibility to sustain our ranking as the Most Peaceful State in the nation. It is on this note that I implore all the citizens of the State to cooperate with the Amotekun corps operatives to make security management easy and peaceful so that we can deliver a strong and prosperous Osun.”
The Governor commended security agencies in Osun for their service to the State and assured that the State Government would continue to support them while also encouraging them to collaborate with one another.
He disclosed that the State Government had procured 20 security vehicles with communication gadgets to support security operatives in the discharge of their responsibility.
“We have recruited 750 vigilantes across all local governments in the State to provide intelligence on the activities and suspicious movements of criminals to the officials of Amotekun.
“We shall continue to provide all the equipment necessary for the successful prosecution of security and execution of the Amotekun Project. We shall continue to strategise to deliver security to the State,” Oyetola added.
In his welcome address, the Chairman, Osun Security Network Agency/Amotekun Corps, Brig. Gen. Ademola Aderibigbe (rtd), applauded the creation of the security outfit which he described as a child of necessity to permanently stem the tide of insecurity in the State in particular and the southwest region in general.
Aderibigbe who lauded the Administration of Governor Oyetola for his continued support to advance the security architecture, expressed confidence in the new security formation to flush out criminals in the State saying the era of zero tolerance for crime and criminality has begun.
He sought the people’s support to ensure seamless operations of the new security formation in the State.
In his goodwill message, the Speaker, Osun House of Assembly, Hon Timothy Owoeye extolled the collective efforts that gave birth to the formation of Amotekun in the Southwest.
He reassured the House’s commitment to continuously support the State in its efforts to guarantee the security of lives and property of the citizens.
The Ogiyan of Ejigbo, Oba Omowonuola Oyeyode Oyesosin appreciated the good gesture of Governor Oyetola at keeping the State safe and secured.
He appealed to the residents particularly the traditional rulers to give their utmost support in terms of useful information to the Amotekun Corps and other security agencies in the State.
Also speaking, the Director General, Development Agenda for Western Nigeria, DAWN Commission, Mr. Seye Oyeleye, hailed the Administration of Governor Oyetola for keying into the sustainable policies and programmes of the Commission aimed to move the southwest and Nigeria forward.
He charged the newly unveiled Amotekun Corps to always exhibit the Omoluabi ethos inculcated in them in the course of the training.
In their separate remarks, the Senate Spokesman, Senator Ajibola Bashiru and former Deputy Governor, State of Osun, Sen. Iyiola Omisore, commended the Governor on the tremendous achievements recorded in the area of security in the State.
He congratulated the Amotekun Corps on the successful completion of the training which according to him will bring about a competent, able and formidable local security network.
[carousel_slide id='8496']