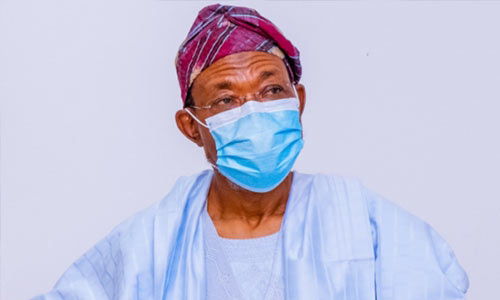 The Minister of Interior, Mr. Rauf Aregbesola, has stated that the Nigeria Correctional Services (NCOS) is partnering with the National Open University (NOUN) to train 3,000 inmates in degree programmes, while 50 are undergoing National Certificates in Education (NCE) at Yewa College of Education, Ogun State, as part of its efforts to decongest correctional facilities across the country.
Aregbesola, who stated this yesterday in Lagos during the policy advocacy conference organised by the Order of the Knights of St Mulumba of the Catholic Archdiocese of Lagos, with the theme: ‘Decongestion of Correctional Centers/Status Quo,’ said the service has 12 special study centers in different custodial facilities across the country.
He also noted that the since inception of the collaboration between the NCOS and the NOUN, a total of 36 inmates have graduated in different fields of study such as Conflict and Peace Resolution, Political Science, Sociology, Guidance, Counselling and others.
Aregbesola, who was represented by the Senior Special Assistant to the Minister on Correctional Services, Mr. Suleiman Tala, remarked that the NCOS has embarked on the rehabilitation of facilities across the country.
He commended President Muhammadu Buhari for approving the construction of 3,000 capacity custodial centers in the six geopolitical zones, adding that the gesture would go a long way in decongesting the correctional centers.
According to him, “the NCOS set an enviable record with the successful containment of the first wave of COVID-19. Considering the high-risk potential of Nigeria Custodial Centers, a lot of fears arose in the height of the pandemic, but gladly, the proactive approach of the service as well as the ministry of interior and the federal government paid off. The dynamic response of the NCOS is what resulted to the NO COVID-19 case scenario in all custodial centers across the country.
“The ministry of interior will continue to do its best in supporting the NCOS to meet its key mandate in line with the NCOS Act 2019 which entails reformation, rehabilitation and reintegration of inmates back into the society. The civil society and faith-based organisation should also play critical roles in rendering services to inmates of the NCOS through offering pro-bono cases, and paying fees for fewer offenders.”
Earlier in his remarks, the Inspector General of Police (IGP), Mr. Alkali Baba Usman, hinted that some of the factors influencing congestion in correctional centers include increase in crime rate, changing dimensions and patterns of crimes, scientific nature of crime, and others.
Usman, who was represented by the Lagos State Commissioner of Police, Mr. Hakeem Odumosu, remarked that the attainment of the mandate of the Nigeria Police is being hampered by high level of distrust between the citizens and their police institution.
He added that no police agency in any clime across the world could succeed in its crime management mandate without the partnership of the citizens.
He said: “The Nigeria Police Force under the leadership of IGP Alkali Baba Usman, has consistently re-emphasised on innovations and modern approaches to improve standard operating procedure and service delivery as well as emplaced proactive and intelligence driven security strategies to nip crime in the bud in order to ease the burden on the already over-stretched criminal justice system and ensure reduction in number of inmates in our correctional centres.
“Having come to realisation that valuable time is being wasted on minor cases which may be disposed of by the police; the inspector General of Police has directed all Police formations to ensure that the criminal justice system is not further over-laboured with minor cases by granting administrative bails.
“In order to enhance speedy trial, the Nigeria Police has adopted the use of technology at interrogation rooms as well as modern facilities to obtain statement. This will assist in gathering incontrovertible evidence to facilitate quick dispensation of justice thereby reducing the period of awaiting trials which by extension will aid the decongestion of our correctional centers facilities.”
In his remarks, the Comptroller General of Corrections, Haliru Nababa, said the service has received budgetary allocation for infrastructure upgrade including the construction of 3,000 capacity ultra-modern custodial centers in the six geo-political zones of the country, adding that the North-west located in Janguza in Kano is close to 95 percent completion.
Nababa, who was represented by the Assistant Comptroller General, Daniel Odharo, posited that similar projects are going on in the Federal Capital Territory (FCT) for the North-Central and Bori in River State for the South-South.
He added: “It is hoped that sub-national governments will assist in the implementation of this legal document including the Administration of Criminal Justice (ACJA) 2015 in order to have a significant progress in overcoming congestion phenomenon in our custodial centers.
[carousel_slide id='8496']