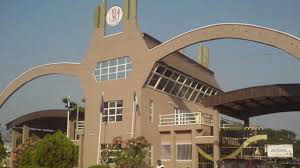 Following the mass protest that greeted the added charges on late school fees payment, the management of the University of Benin (UNIBEN), have announced the immediate and indefinite closure of the institution.
Hundreds of affected students of the University had Tuesday morning taken to the streets to protest what they called incessant extra charges on late payment of school fee.
It was gathered that the students were first charged additional N14,000 to their regular school fees, and an additional N6,000 within a short notice.
The protest resulted in heavy traffic gridlock along the Benin-Lagos highway, causing motorists, especially those traveling to Lagos and other destinations to remain at a standstill for several hours.
UNIBEN in a statement signed by the Registrar, Ademola Bobola, said the closure takes immediate effect.
It added that the decision to close the University is in the overall interest of the students and to avoid the students’ action being hijacked by hoodlums.
“The Vice Chancellor has reviewed the agitation by a section of the students’ body on Tuesday 14th September, 2021.
“After due consultation, and in the overall interest of the general students’ body, the Vice Chancellor has, on behalf of Senate, approved the closure of the University with immediate effect.
“This is based on security reports to avoid the students’ action being hijacked by hoodlums; and thereby prevent any form of breakdown of law and order within and outside the campuses of the University.”
[carousel_slide id='8496']